Samsung’s Galaxy Grand 3 is thinner and lighter, but still not enough to impress

Samsung’s upcoming Galaxy Grand 3 could be just days away from going official as the Telecommunication Equipment Certification Center in China has certified the handset for sale in the country. The phone is the successor to the widely popular Grand 2 which went official in November 2013.

We already know a lot about the Samsung Galaxy Grand 3 since it was leaked by a benchmark website last month. But TENAA has provided much more than just hardware details. We’ve gotten the first look at the smartphone and it’s certainly what we expected – Another mediocre-looking device flaunting the same old design. 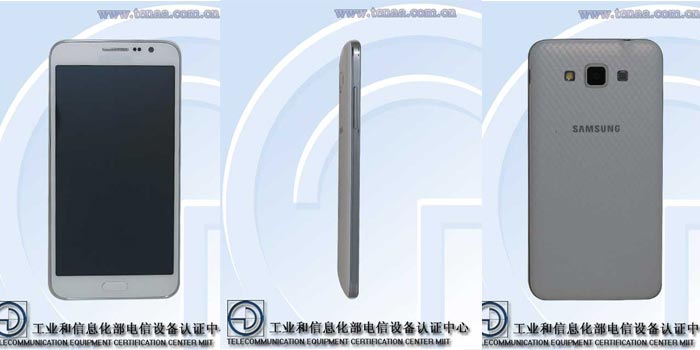 At least the company decided to throw in a different texture for the rear panel which again, is far from being attractive. The phone is lighter than its predecessor at 140 grams and it’s thinner as well, at 7.95mm. Like every other new Samsung phone that gets leaked or launched, this one will also feature a 64-bit processor. The chip will be the 1.2GHz quad core Snapdragon 410.

Some reports state that the phone will have a 5.5-inch display, while others suggest that the screen size will be of 5.25 inches. Well, it looks like the latter information was authentic as the certification website also shows a 5.25-inch panel with 720p HD resolution. Nevertheless, Samsung could be working on a larger model as well.

The Samsung Galaxy Grand 3 will carry the model number SM-G7200 and PhoneArena notes that it’ll arrive in black and white amongst other colors.