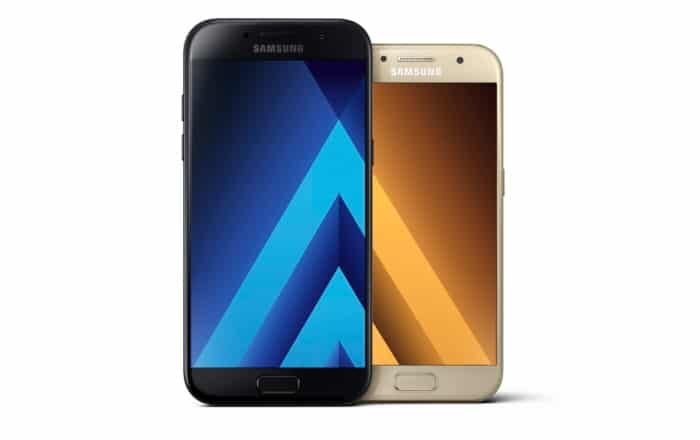 This year’s Samsung Galaxy A range has been the topic of many a discussion lately thanks to various leaks, but the talks can finally cease, even as the phones from this series have finally been unveiled. The 2017 models of the A series have benefitted from a waterproof design, USB Type-C ports and upgraded 16MP main cameras, among other things.

The IP68 rating brings the Samsung Galaxy A3 (2017), A5 (2017) and A7 (2017) smartphones in line with the Galaxy S7. Thanks to it, they can survive in up to 5 feet of water for 30 minutes. USB Type-C support allows fast charging to enter the realm, while support for NFC and microSD cards is also there.

However, it’s disappointing to know that all three of these devices are launching with Marshmallow onboard, rather than Nougat. Anyway, their design still incorporates glass and metal, but a major change is that the speaker grill has moved to the right shoulder now. The selfie cameras have been given two new features; one being a floating shutter button for easy access and the other, the facility for the display to light up to emulate a flash.

As for the devices themselves, the Samsung Galaxy A3 (2017) kicks in a 4.7-inch 720p display, a 1.6GHz octa core CPU, 2GB of RAM, 16GB of storage and a 2350mAh battery. Since it’s an entry-level device, it doesn’t benefit from the 16MP camera which is present on the other two devices. It instead receives a 13MP back shooter and an 8MP front camera.

Samsung plans to release the Galaxy A (2017) handsets in Russia and select Asian markets later this month. And in February, they will be seen making their way into Europe. Their prices will be revealed closer to release.