We had seen the Samsung Galaxy Tab 3V unveiled for Malaysia not too long ago, but the device has finally managed to enter India. It’s an affordable 7-inch tablet which can be yours at Rs 10600. While it has indeed been listed on the company’s official eStore for the country, it has not yet been made available for purchase.

The Samsung Galaxy Tab 3V is not a voice calling slate but it does support 3G via a SIM card slot. It showcases its visuals on a 7-inch WSVGA (1024 x 600 pixels) LCD panel, and provides fuel to its operations via a 1.3GHz quad core processor that sits atop an unmentioned chipset.

Assisting the CPU in its job is a 1GB RAM module and a 3600mAh battery. Selfie enthusiasts will be disappointed to know that this Samsung tablet does not feature a front camera of its own. It does however kick in a rear unit that can manage 5MP photographs. 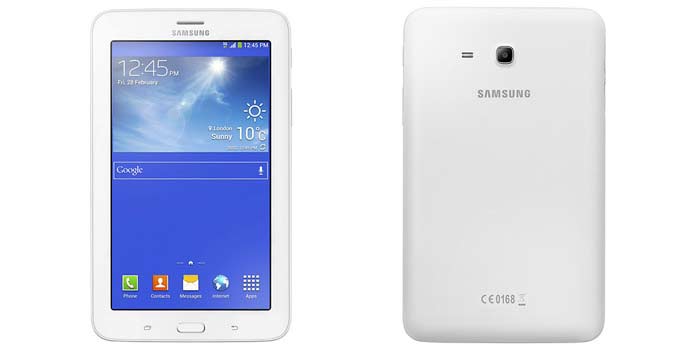 Sized at 193.4 x 116.4 x 9.7mm, the Galaxy Tab 3V has its weight set at 322gms. It offers 8GB of stock storage that can of course be expanded further through its microSD card slot. Lastly, Android 4.4 KitKat is its preferred OS.

A deep look at the main specs of the Samsung Galaxy Tab 3V:

Like we said, while the Samsung Galaxy Tab 3V has been listed on the company’s eStore, it is not yet purchasable. We’re guessing that it should be made available within the next few days.