Samsung has been long rumored to be working on a 7-inch voice calling tablet that features a smartphone design, under the name Galaxy W. Well, the device is now official and it’s being touted as a super-sized phablet.

This isn’t the first time we’re seeing the conglomerate launch a 7-inch voice calling tablet. It’s being doing so from a few years with the Galaxy Tab line. What’s different about the Samsung Galaxy W is that it looks like your everyday Galaxy phone – Picture a much larger Mega 6.3. And unlike traditional 7-inch slates, this one sports slim bezels and it also looks to be designed for single hand use. Engadget notes that the device isn’t of flagship status, but a mid-range phablet. 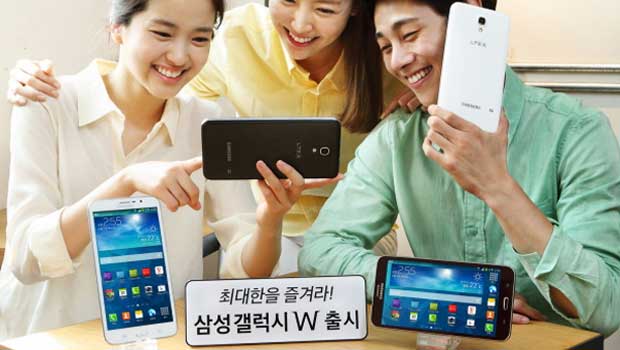 The display proffers 720p HD resolution and is accompanied by a 2MP camera. The rear has an 8MP snapper with LED flash. While you’d expect the slate to feature the latest release of KitKat out of the box, this newly launched device will come with an older version of Android – 4.3 Jelly Bean. On the inside, it features the same 1.2GHz quad core processor and 1.5GB of RAM as the current Galaxy Tab 4 series. LTE-A connectivity is also onboard.

The Galaxy W is expected to be exclusive to South Korea, but it could reach the international markets under the Mega 2 branding. Interestingly, Samsung also has a smartphone from 2011 that carries the same name.