Like most phones from big brands these days, the Samsung W789 Hennessy enjoyed its fair share of limelight prior to its official release by means of rumors and leaks. And as it turns out, almost all the speculations associated with it have turned out to be true now that Samsung has decided to showcase it fully. It’s essentially a China-only phone at the moment, which runs the Android OS and features two displays and dual SIM capability for CDMA and GSM radios. There’s no word yet about its price and availability.

It comes equipped with a pair of 3.3-inch HVGA touch panels each bearing a resolution of 320 x 480 pixels. Under its hood furthermore, rests a 1.2GHz quad core processor, and while its make is unknown, our money is on a Qualcomm Snapdragon 200 chipset. The Android Jelly Bean OS in its 4.1 form makes its way into the device, layered with Samsung’s usual TouchWIZ users interface. There’s no secondary camera on the whole setup but there’s indeed a 5MP rear snapper that its users will be able to employ in order to click photographs and record videos. 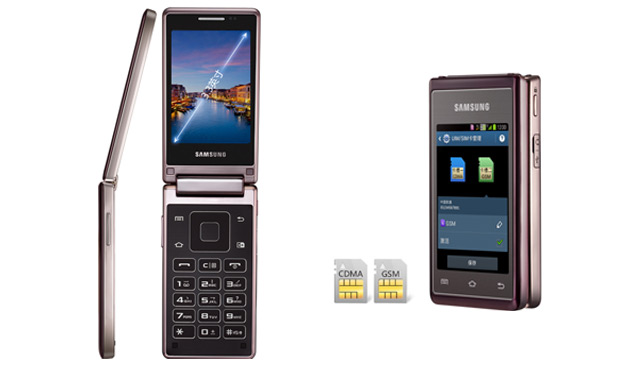 Standard connectivity options like Bluetooth, Wi-Fi and GPS have been infused into the handset as well, and it’s powered by a 1,500mAh battery. It should be noted that the W789 Hennessy isn’t the only flip phone that Samsung has been prepping up. Past rumors have suggested that an LTE and NFC-equipped Galaxy Folder smartphone which too features a couple of touch displays is on the anvil. We can expect its official announcement soon.

Whether the Samsung W789 Hennessy will be hitting territories other than China anytime soon is still to be revealed by the South Korean company.