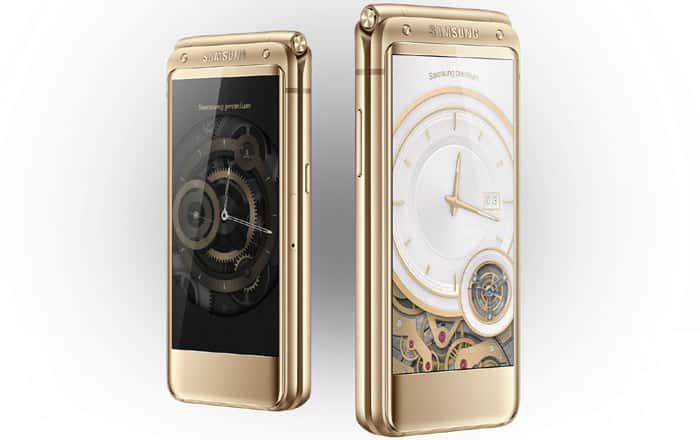 Samsung’s officially unveiled a brand new flip phone dubbed the W2017 in China, nearly a year after launching its previous variant. The new handset is a premium affair, decked out with top-of-the-line specs commonly found in flagship smartphones.

Diving straight into its features, the W2017 possesses two 4.2-inch Super AMOLED FHD screens and a physical keyboard. A quad-core Snapdragon 820 processor keeps things moving smoothly, helped along by 4GB of RAM and 64GB of ROM. The phone runs on Android 6.0.1 Marshmallow and a 2300mAh battery.

Samsung’s enhanced the offering by equipping it with modern-day features like a fingerprint sensor, wireless charging, Always On Display, and Samsung Pay. In terms of photography, it carries a 12MP primary camera which boasts of an aperture of f/1.7, LED flash, and 4K video recording support. The unit has been paired with a 5MP selfie snapper on the front.

Here’s a quick look at the top specifications of the Samsung W2017:

Samsung hasn’t announced an official price tag for the W2017 yet. As per SamMobile, the flip phone may go for an eye-watering CNY 20000 (roughly $2953 or Rs 1.97 lakh). There’s no word on whether it’ll travel outside China anytime soon. Its predecessor notably didn’t make the trip to international markets.