It looks like the Samsung Galaxy Note 3 is indeed coming on September 4 as a picture shared by the official Twitter handle of the company reveals that the Unpacked 2013 Episode 2 has been scheduled to take place on this date. Back in July, we had reported that the third generation Samsung phablet will be introduced during the IFA 2013 in Berlin and the OEM will start sending out invitations in August and that’s exactly what has happened.

Although the invite doesn’t mention that the conference will serve as a launch pad for the Samsung Galaxy Note 3, it is pretty obvious considering that the expo is where the first two generations of the phablet were introduced in 2011 and 2012. Apart from uploading the invite on its Twitter account, the South Korean manufacturer has also sent it out to the media without any hint about what to expect at the event. The IFA 2013 will start on September 6 and the company in question is most likely to have the upcoming device on display at their booth. 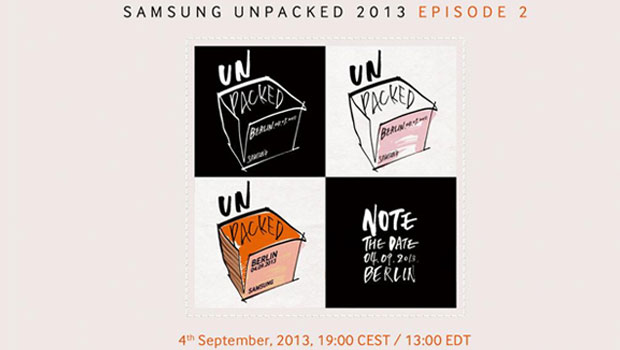 The Samsung Galaxy Note 3 smartphone’s purported specifications have already been leaked and we are expecting the device to rock the latest version of Android Jelly Bean. It will most probably sport a screen that’s at least 5.7-inch in size and may employ the quad core Qualcomm Snapdragon 800 processor with 3GB of RAM.

And that’s not all. The Samsung Galaxy Note 3 may come in various versions with different types of screens and camera lenses. One of the models will sport an unbreakable AMOLED display, while the others will have to make do with either a regular AMOLED screen or LCDs. And it goes without saying that the phone will arrive drenched in multiple shades and will have a pen stylus for company.

As we already said, the Unpacked 2013 Episode 2 will unfold on September 4 in Berlin to mark the debut of the Galaxy Note 3.