The Samsung Galaxy S5 is a premium smartphone alright, but its maker is trying to justify that by offering out-of-the-way services. These include free pick-ups and deliveries in case of issues as well as a one-time screen replacement for the price of just Rs 990.

We are not sure what has propelled Samsung to go for such schemes all of a sudden, however it does seem like a measure to calm down the clamor that was made due to the high price tag which the Galaxy S5 was bestowed with at launch. But isn’t this too little too late and wasn’t the smartphone granted a price cut recently as well? 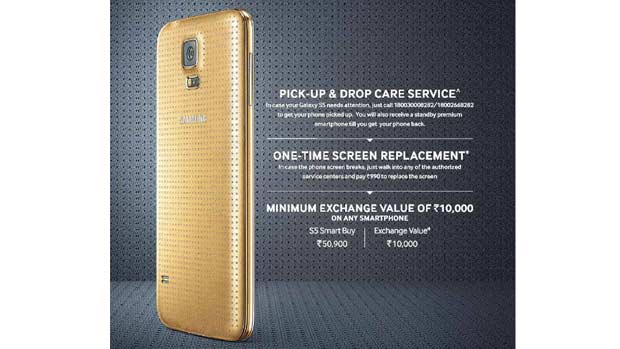 Apparently this isn’t proving enough to pull customers towards the flagship it seems. The pick-up and delivery scheme is initially applicable only for Kolkata, Mumbai, Pune, Bangalore, Ahmedabad, Hyderabad, Delhi and NCR, Chennai, Chandigarh, Lucknow, Cochin, Vizag and Jaipur, according to BGR India.

All owners of the handset have to do is call the service center and report about their issues to arrange for a pick-up. Moreover, during the time their Galaxy S5 will be in servicing, they will receive a standby handset as well.

And that’s not all; the company has also announced a new Rs 10,000 buyback offer for the device in exchange of old smartphones. This however, applies to its market operating price of Rs 50,900, which means that the device will be made available at Rs 40,900. This is still more than what retailers in India are now offering the phone at without any buyback.

How well these premium services and the new and seemingly useless buyback scheme for the Samsung Galaxy S5 will contribute to its sales remains to be seen now.