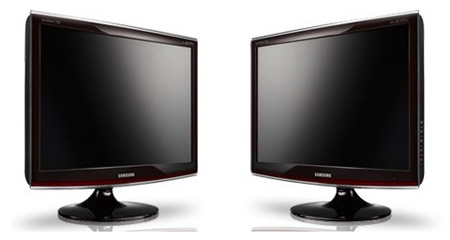 Samsung America has introduced the Touch Of Color (TOC) range of desktop monitors namely the T190, T220, T240 and T260. The new monitors possess an ultra-sleek design and a deep ruby red infusion that complements its piano-black, glossy finish giving it a blown glass look.

The energy efficient monitors include SoftPower off function allowing users to put the monitor into standby mode, while consuming only 0.3 watts of power.

The TOC monitors are also equipped with the multi-screen functionality, which will allow users to divide their screen into different workstations, sorting programs and projects to increase their productivity without any additional software.

“With our new Touch of Color monitors, Samsung maintains the industry standard for design and functionality,” said Christopher Franey, Vice President, Marketing & Commercial Sales, Samsung Electronics America “Our monitors’ sleek, minimalist design and deep ruby red accent compliment stylish home and office environments alike. In developing the TOC monitors we did not compromise or sacrifice aesthetics for functionality but instead, achieved the best of both.”