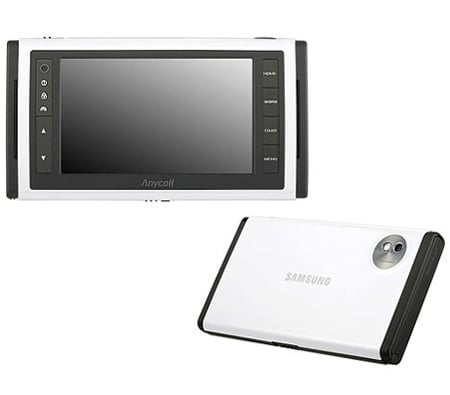 Samsung has launched its latest SWT-W100K portable media player. However, it does much beyond simply acting like a jukebox. The new W100K PMP incorporates a fourth-gen internet access feature, making it literally act as your PC.

Samsung’s new gizmo is one of the very few devices which supports WiBro (AKA WiMAX as it is fondly known as in the West) while on-the-move and pulls data more rapidly than some landline connections. It has an ability to download up to 13Mbps and has enough upload speed for high-quality video calls with an integrated front camera. The back 2MP camera rear-facing and VGA front-facing camera. Its OS is not known as yet.

The SWT-W100K includes an in-car companion and Samsung supplies it with a GPS receiver for mapping duties and also a DMB tuner for catching over-the-air digital TV in its homeland.

Samsung will roll out the W100K in Korea at € 341, which comes to around $525. No precise details on the availability have been revealed yet. As of now Samsung has not revealed if the device would be moving out of its native land or not.