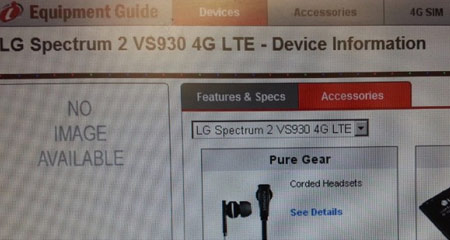 Those who can’t get enough of those sequels even when it comes to devices, may love the fact that the Samsung Stratosphere 2 and LG Spectrum 2 are making their way to Verizon Wireless. Intuition tells us that the carrier is gearing up for a busy September and this pair won’t demand the least of its attention.

The only solid piece of information on the Samsung phone is that it will flaunt a Super AMOLED screen of 4 inches. And since it’s coming to Verizon, Droid Life, who dug up this news, assumes it will be a 4G LTE handset complete with a Snapdragon S4 chip. Allegedly going by the SCH-I415 model name, it is chipped out to show the same form factor with a QWERTY keypad as the original Stratosphere.

The Equipment Guide from which the evidence was snapped reveals the LG device’s model number as VS930. This fresh rumor indicates that the smartphone will have a 1.5GHz dual core Snapdragon S4 CPU, 1GB RAM, an 8MP camera and an HD display. Basically, it confirms some of the specs from an older tidbit about the handset. 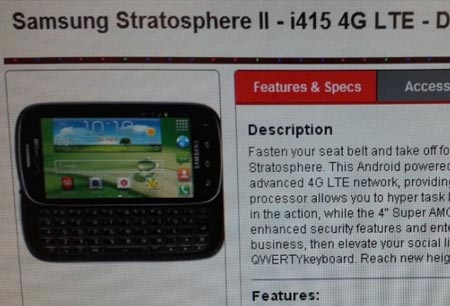 So if previous leaks can be proved right, then the Spectrum’s successor will have a 4.7-inch True HD IPS screen and 16GB of internal hoarding space. On the connectivity front, users may be looking at NFC, apart from the inevitable Bluetooth and Wi-Fi options. Android Ice Cream Sandwich and a Jelly Bean update also appear to be on the menu.

As is usual with most news bits that break cover unofficially, the LG Spectrum 2 and Samsung Stratosphere 2 Verizon price and release date details are yet to be let loose.