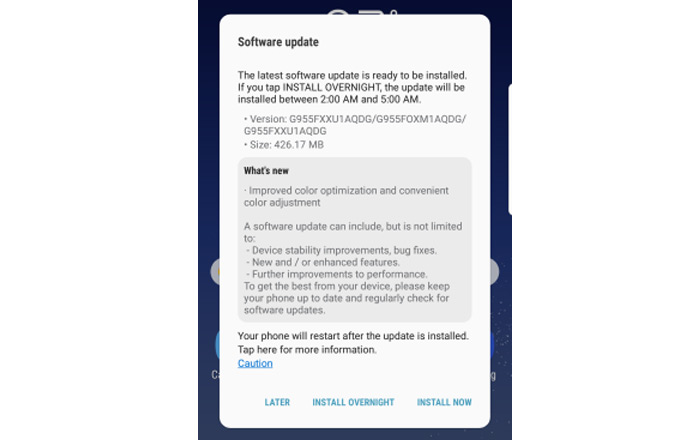 Samsung began rolling out a fix for the Galaxy S8 and Galaxy S8+ last week which promised to correct the reddish tint seen on some units. That update initially hit South Korea and is now making its way to India and the US.

Samsung hasn’t actually released the Galaxy S8 in India yet, making this a pre-emptive move to douse the problem before it catches fire. The firmware version of the upgrade is XXU1AQDG and it weighs in at a pretty hefty 426MB. The main change the update introduces is improved color optimization and convenient color adjustment.

This is Samsung-speak for new options which have popped up in the color temperature settings. Once the upgrade has been installed, owners can head to Screen Mode and choose Adaptive Display. The window that pops up lets them adjust the ‘Full screen color balance.’

They can then choose to make the panel cooler in order to cut down on the reddish hue. There are also advanced options to further tweak the blue, green and red levels, in addition to a Screen Edge Color Balance setting to change the colors at the edge to modify the appearance of white tones.

The Galaxy S8 and Galaxy S8+ are set to hit stores in India on May 5. As per SamMobile, units of the phones have already begun shipping to consumers who pre-ordered it. You can still place a pre-order either via Samsung’s website or Flipkart and get a free wireless charger.