Samsung has announced the Smartphone GamePad controller that can be paired up with Galaxy devices via Bluetooth or NFC for transforming them into compact consoles for on-the-go gaming. The Mobile Console application has also been introduced along with it to make it easy for users to browse and purchase games.

You can use it to convert the phone to either a portable gaming console or a home console. The gadget is wrapped within a chassis with a durable steel frame and is capable of handling smartphones with screen sizes between 4 and 6.3 inches. And those who wish to play games in their living rooms on a big screen can simply connect the handsets to a TV via an HDMI cable or AllShare Screen Mirroring.

The gaming accessory is compatible with smartphones running Android 4.1 or later versions, but has especially been optimized for Samsung phones based on Jelly Bean 4.3. It connects via Bluetooth with all compliant devices and those running the latter platform can even make use of NFC tagging for the same purpose. 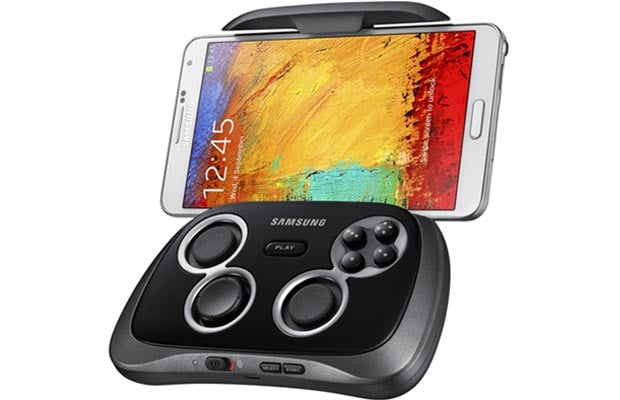 This D-Pad controller comes drenched in the shade of black and has dimensions of 137.78 x 86.47 x 31.80 millimeters. It weighs in at merely 195 grams and packs in a rechargeable battery too. Apart from a ‘Play’ button that launches the Mobile Console app on Jelly Bean 4.3-based devices, the accessory is embedded with 2 analog sticks, 2 trigger buttons, 4 action buttons, a start button and a select key. The app lets you purchase games like Need for Speed Most Wanted, Asphalt 8: Airborne, Modern Combat 4: Zero Hour and others which have been optimized for the console.

The Samsung Smartphone GamePad controller is currently available in Europe and should be released in other regions soon.