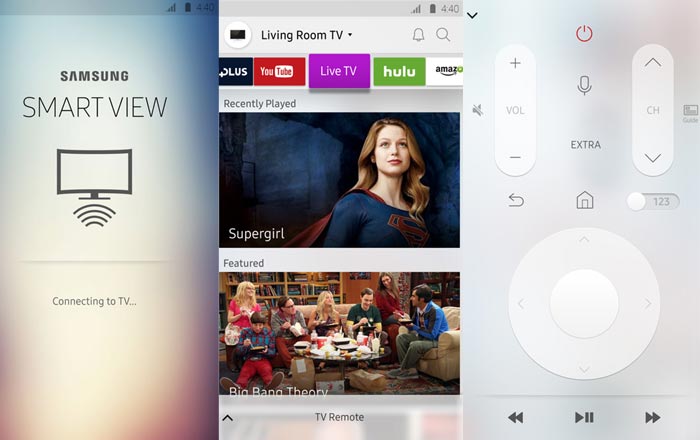 Samsung’s looking to compete with Google’s Chromecast service with its own revamped Smart View app for smart TVs. The application’s iOS avatar recently got updated with screenshots showcasing what’s next for the tool.

To be clear, Samsung hasn’t actually announced anything related to its updated Smart View app. It’s possible the images went up prematurely before a scheduled announcement of the app’s newfound streaming abilities at CES 2017.

Smart View has so far restricted itself to broadcast locally stored content like music, videos and photos from a handset to a smart TV. However, its next iteration seems like it can beam out content from a number of providers such as Hulu, YouTube, and Amazon Prime Video.

There’s also a new tab for live TV content which contains things like recently watched shows and featured content. Other tabs cover locally stored media and Samsung’s Fandago-powered TV Plus service. The modifications are pretty significant, signaling the brand’s intentions to project the app as a hub for content and a convenient remote control.

Variety points out that Smart View also has a search icon which could be an indication that Samsung has some kind of universal search feature up its sleeve. The upgraded tool will likely compete with Apple’s new TV app for supremacy in the streaming aggregator world.

Both Samsung and Apple don’t appear to feature Netflix among their roster of partners, marking a major disadvantage for both. The popular streaming service apparently prefers to keep things in-house rather than diversify into third-content apps.