Samsung has announced the launch of its Smart Home service which has been aimed by the company towards providing consumers with an extremely connected house environment. This means you can now control home appliances, TVs and as well as mobile devices using a single app no matter where you are at a given moment.

Intended only for Korea and the US right now, Samsung Smart Home is complemented by certain compatible gadgets which can all be controlled simultaneously. An example would be saying ‘Good night’ to your remote control which will turn off all connected devices in your home such as Smart Bulbs, air conditioners and more. 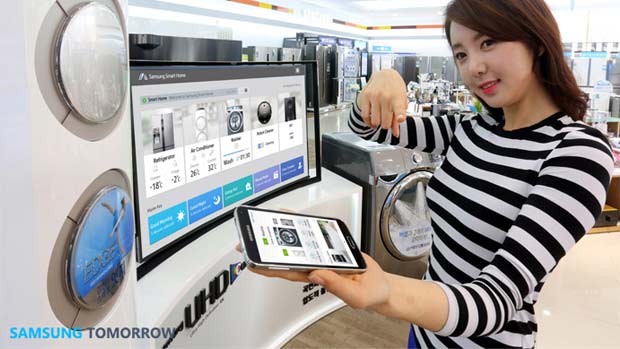 The app will work on smartphones, tablets as well as wearables, and will let you check the status of your home appliances no matter where you are. However, only a select list of devices have been announced to be compatible with Samsung Smart Home.

For Korea, these include the company’s new Q9000 air conditioner model, the Bubbleshot 3 W9000 washer, all Smart TVs launched in 2014 as well as the Samsung Gear 2 and Android devices featuring the 4.0 version of the OS or up. In the US on the other hand, the company’s Smart French Door refrigerator, Smart Front Loading washing machine and all Smart TV models launched this year will be compatible aside from the Gear 2 and Android devices.

A number of new gadgets are also in line to be infused into the Samsung Smart Home team, prime among those being Smart Bulbs and Smart Ovens which will be launched by the company later this year.