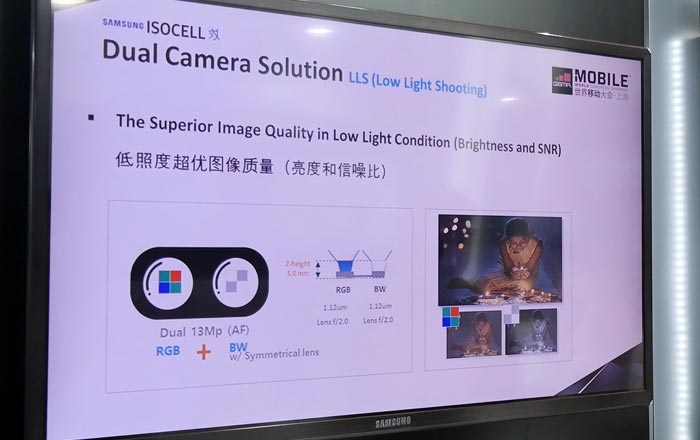 Samsung’s making its presence felt at the MWC Shanghai 2017 by launching 4 new camera sensors under its ISOCELL brand. These new designs consist of the ISOCELL Bright, Fast, Slim, and Dual.

The ISOCELL Dual is of particular interest since Samsung is believed to be fixing a twin-camera setup on 2 of its upcoming phones namely the Galaxy C10 and Galaxy Note 8. In its press release on the topic, the company says the product’s sensors can be mixed and matched in various combinations to give way to different features.

This sounds pretty intriguing, perhaps leading to twin lens combos where there are 2 unique sensors fulfilling different purposes for one goal. Samsung’s exhibit at the MWC Shanghai (see above) specifically talks about a dual 13MP autofocus system where one component captures RGB and the other black and white colors.

Samsung touts that this pairing can bring about superior image quality in low light conditions, armed with an aperture of f/2.0 and 1.12 micron pixels. Huawei notably also uses a similar color + monochrome setup for the P9 and P10.

Speculation so far suggests that the Galaxy Note could sport either 12MP or 13MP dual cameras, with most reports favoring the former configuration. Reliable leakster Ming-Chi Kuo had previously predicted that the module will be superior to the iPhone 7 Plus and equal to the iPhone 8, while also backing a 12MP + 13MP combination.

The Galaxy Note 8 is probably going to be announced in late August or September. Stay tuned for more on it till then.