The Samsung Galaxy S5 Zoom might ring a bell for you, but if you’re wondering what the Galaxy K Zoom is, be informed that it’s the same phone. A teaser invitation for an event slated for April 29 has been sent out by the South Korean giant with enough clues about what it will be all about.

Samsung has apparently opted for not naming this device S5 Zoom due to the fact that it has very few things common with the new flagship. As past leaks have revealed, it will grab a 4.8-inch Super AMOLED panel with 720p HD resolution. Its highlight of course, will be a 20.2MP camera sensor.

Contradicting reports of either a hexa core or a quad core processor forming part of it are out at the moment. 2GB wroth of RAM could also be present on this camera-phone hybrid. The Samsung Galaxy K Zoom will run the Android KitKat 4.4.2 OS and will also grab the new and improved TouchWIZ user interface.

Last year too, the company had given a camera-phone treatment to its flagship, the S4. It featured a 4.3-inch 540 x 960 pixel panel and a 16MP camera with 10x zoom. This device too had very few things common with the Samsung Galaxy S4 but it chose to stick with that name nonetheless. 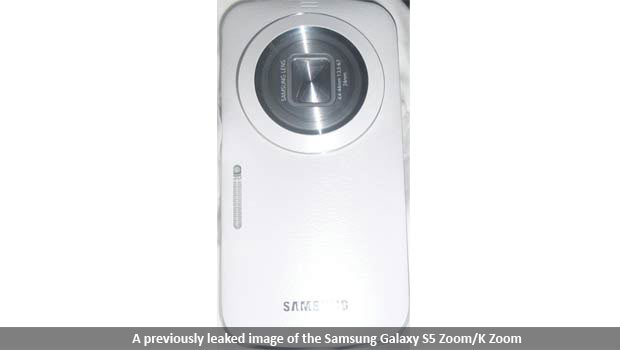 We’ll make sure to bring you all the details that are revealed at the Samsung Galaxy K Zoom launch event on April 29, so stay tuned.