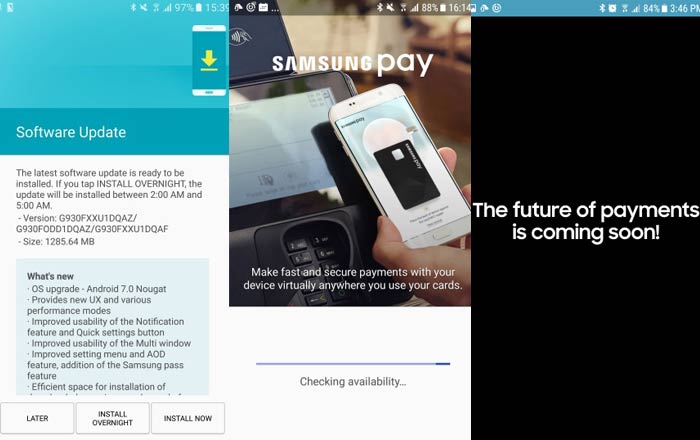 Indian and Russian owners of the Galaxy S7 and Galaxy S7 Edge have started getting the promotion to Android 7.0 Nougat. The update began hitting consumers in South Korea, France, China, Malaysia, the UK, and the UAE last week.

The Android 7.0 upgrade is pretty hefty, weighing in at 1285.64MB for the Galaxy S7 and 1290.74MB for the Galaxy S7 Edge. Users who would rather have it set up between 2 am and 5 am at night when there’s less likelihood of missing important calls or messages can choose the ‘Install Overnight’ option.

Interestingly, it appears Samsung is looking to introduce Samsung Pay in India. SamMobile reports that a window which says ‘The future of payments is coming soon!’ shows up after Android 7.0 is up and running in a Galaxy S7 and S7 Edge. This is a clear enough indication that the payment service might be landing in the country.

Further evidence for this theory comes in the form of the Samsung Pay app being present on the Galaxy S7 and S7 Edge post the update process. There’s no date revealed in the brief teaser, meaning it could be weeks or months before the feature arrives in the nation.

Samsung Pay basically lets individuals turn their handset into a virtual wallet capable of holding credit, debit, gift, membership, and rewards cards. The device can then effectively be used in place of physical cards to conduct transactions in shops or apps.