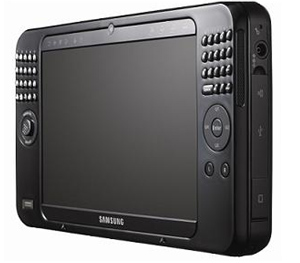 Yesterday, Samsung announced the availability of its next-generation Q1 Ultra UMPC family at the Samsung Experience event that took place in New York. Exactly one year ago, Samsung introduced its Q1 UMPC. By the sound of it, the newer one seems to have some extra features when compared with the company’s offering last year.

According to Christopher Franey, Samsung’s VP of Sales and Marketing, “Since the introduction of the Q1, Samsung has steadfastly been committed to the long-term growth and development of this fast-growing product segment. In creating the Q1 Ultra UMPC, Samsung has relied on consumer insights coupled with key technological advances to deliver a higher-performance solution packaged in an even more portable form factor that will appeal to a broader range of personal and professional users.”

Fans of Ultra Mobile PCs will be the first to notice that the Samsung Q1 Ultra UMPC has an integrated split QWERTY keyboard that allows for rapid text entries with the user’s thumbs while holding the unit in both hands.

In fact, one problem that UMPC users have encountered is data entry. Various methods have been tried and tested, such as touch screen, styli, and on-screen keyboards. However, no data entry methods really stood out.

The Samsung Q1 Ultra UMPC is built on the Intel Ultra Mobile processor that runs at either 600 or 800 MHz, along with 1GB of RAM.

Samsung has also claimed to have increased the battery life in the Q1 Ultra UMPC from 1.75 hours. It is now able to support a minimum of 4.5 hours of continuous run time.

Accessories for the Samsung Q1 Ultra UMPC include a US/Canadian GPRS module, a docking station with three USB ports and an external USB keyboard. And that is not all! You can also opt for an integrated fingerprint reader.