Once a certain trend takes off, others just can wait to jump on the bandwagon. Apple’s iPhone 5S drenched in champagne-gold has been a hit around the globe and Samsung plans to offer its own Galaxy S4 in gold. While there have been many color choices in the past, this will apparently be the first time that the South Korean conglomerate has selected this particular hue for its flagship.

The Verge notes that the company is currently showcasing the device in the United Arab Emirates via social networks such as Facebook and Twitter. The phone is being offered in two variants, one in brown and the other in pink. Both smartphones are being touted as part of the new Galaxy S4 Gold Edition lineup. 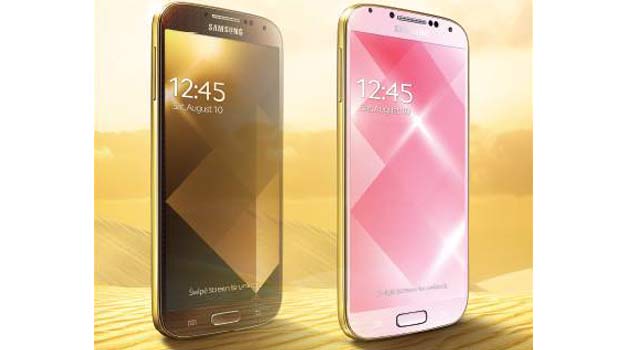 Seeing as this is simply going to be a color variant, the main features and specifications of the handset will be the same as the original. That means you’ll receive a 5-inch Super AMOLED touchscreen with 1080p visuals on the front and a 2MP webcam. While the rear plays host to a 13MP camera, processing power will be delivered either by a Snapdragon 800 SOC or the upgraded Exynos 5 Octa.

The S4 also sports 2GB of RAM, a microSD card slot that supports up to 64GB of storage, memory options of 16GB, 32GB and 64GB as well as Android 4.2 with TouchWiz on the top. There’s a 2,600mAh battery powering it up.

Introducing the new #GalaxyS4 Gold Edition – for a style that's uniquely yours! pic.twitter.com/XkFu4zceHT

There are no concrete details as to when the new Galaxy S4 Gold Edition will hit the UAE and the possibility of a global launch is also uncertain. You can expect both color variants to sell for the same price as the original.