Tizen smartphones and the flagship S5 aren’t the only devices expected at the MWC 2014 as a new report suggests that Samsung will also take the wraps off the Galaxy Gear 2 smartwatch and the Galaxy Tab 4 slates at the expo later this month. The accessory and the tablet range have been leaked multiple times already, but we’re yet to hear the company officially reveal this information.

The news broke out through ZDNet Korea that has learnt of the upcoming launch through multiple local sources. According to the report, the conglomerate will showcase three main categories at the expo, smartphones, tablets and werables. The Samsung Galaxy Gear 2 has been teased by the company before, but very little is known about the device. 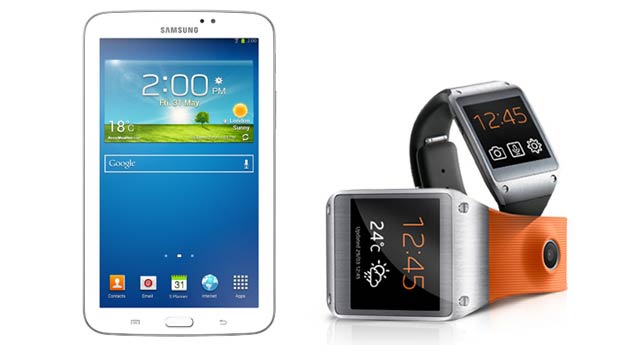 The overall design of the Samsung Galaxy Gear 2 will be modified. The smartwatch will feature a flexible OLED display instead of a Super AMOLED panel. The original accessory was well received, but faced difficulties in the market owing to its high price tag. Then there was limited compatibility at launch, with not many devices being supported as yet. The company has started reducing the price of the accessory over the months and this has got us believing as well, that a new model is on the horizon.

Where the Samsung Galaxy Tab 4 is concerned, the series will feature a significant upgrade in specifications. From the first generation, up to the current revisions, the slates have been criticized for their mediocre hardware. The company might just fix this problem by implementing quad core 1.2GHz processors in each model. Speaking of which, the slates will arrive in the usual 7-inch, 8-inch and 10.1-inch versions. They will run on Android 4.4 KitKat and feature up to 64GB of storage, a 6800mAh battery as well as a microSD card slot amongst others.

We’re less than two weeks from seeing the Samsung Galaxy S5 from go official. If the latest information holds true, the Galaxy Gear 2 and Galaxy Tab 4 devices will also be present at the MWC 2014.