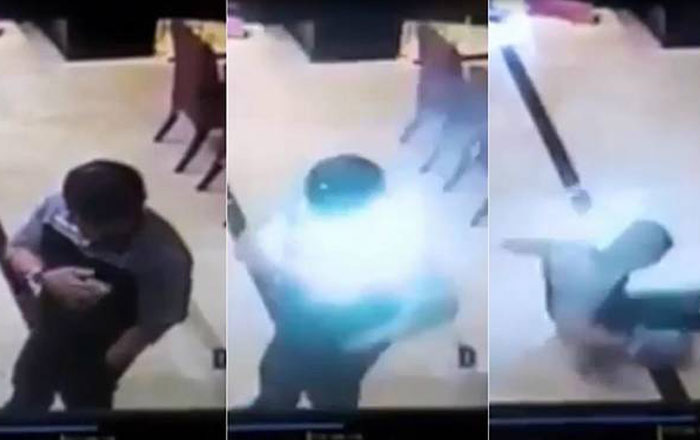 After successfully rehabilitating its image after the disaster that was the Galaxy Note 7, Samsung has once again landed in trouble because of an exploding battery. However, it seems the company may not be entirely at fault this time.

The incident in question occurred on September 30 and was caught on camera at a hotel in Indonesia where a man named Yulianto worked. He can be seen reaching for his Galaxy Grand Duos when it suddenly bursts into flames, emitting blue sparks and setting his shirt on fire.

A bystander rushes to help before Yulianto manages to remove his shirt. He apparently suffered minor burns and was taken to a hospital to treat them. He later told the Daily Mail that he felt a strong sensation of heat and shaking, panicking when he realized he was on fire.

Yulianto claims that he has never had a problem with his Galaxy Grand Duos before. The phone wasn’t attached to a portable charger when it blasted open, though some reports state that Wi-Fi, Bluetooth, and GPS connections might have contributed to the overheating.

The local police is currently investigating the occurrence. Samsung for its part launched its own inquiry into the matter. It told CNET that Yulianto was using a third-party battery which wasn’t manufactured by it or any of its authorized partners. The brand then urged people to use genuine or approved batteries for its products.

This is a good rule to follow for smartphones in general. The Galaxy Grand Duos hails from 2013 and there haven’t been any reported cases of its exploding, so there probably isn’t a Galaxy Note 7-style epidemic on our hands.