Samsung’s Ativ Q never did make it to the market, but the company’s plans of offering Android and Windows under the same roof are still alive, or so suggest a newly discovered patent. It looks the firm has devised a way it can have dual platforms like Windows and Android running on the same machine without facing issues with either Microsoft or Google.

A patent from the OEM shows a specially designed notebook which features a dock for a phablet just above the keyboard. The handset could run Android in smartphone mode and switch over to a notebook-like UI when docked.

There’s even the possibility of Windows being the OS of choice when the phablet is connected to the notebook. According to Patently Mobile, there’s good chance that the handset could come with Windows preloaded and not Google’s mobile OS. 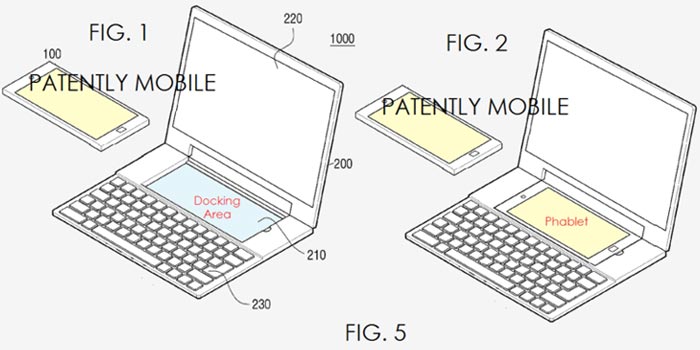 The patent application suggests two possible uses of the docking system. In one case, the phablet will deliver a full version of Windows to the notebook display and continue to run Android on its own screen. And there could be a second state where the phone’s touchscreen will double as a touchpad for the OS displayed on the larger panel.

While making two different platforms boot from one smartphone seems farfetched, Samsung has also revealed in the patent that Android could come via the handset and used on the laptop display after docked, while the notebook itself could have Windows preloaded. Also, depending on whether the device is docked, the BIOS can automatically boot the primary or secondary OS.

The patent application for this dual OS hybrid notebook with a smartphone dock was filed back in Q3 of 2014. There’s no word on whether we’ll really see such a device make it to the market.