Samsung’s bendable phone has been the subject of much discussion over the years, with the last round of rumors concluding that the device, codenamed Project Valley or Galaxy X, could come out in 2017. Most of the rumors concentrated on its features without any kind of glimpse into how it would actually look.

A fresh Samsung patent application has now emerged which may well provide a visual insight into what the brand is planning. The patent was apparently filed in April this year and features a smartphone with a flexible hinge at it center. The style looks very similar to Microsoft’s Surface Book laptop which could mean that the handset won’t bend completely flat.

The design further serves as a throwback to old-school flip phones, but with a sci-fi twist. As per the International Business Times, the patent talks about a device which can be folded or unfolded semi-automatically. The document also details a flexible and secondary display.

Samsung also went into some details about how this dual-screen setup would work. The primary panel is apparently closed by the cover. It’s in this folded state that the secondary display is opened. Unfortunately, there’s no guarantee this patent will ever come to fruition, though the fact that it was filed a few months ago does indicate that the company is actively working on bendable technology. 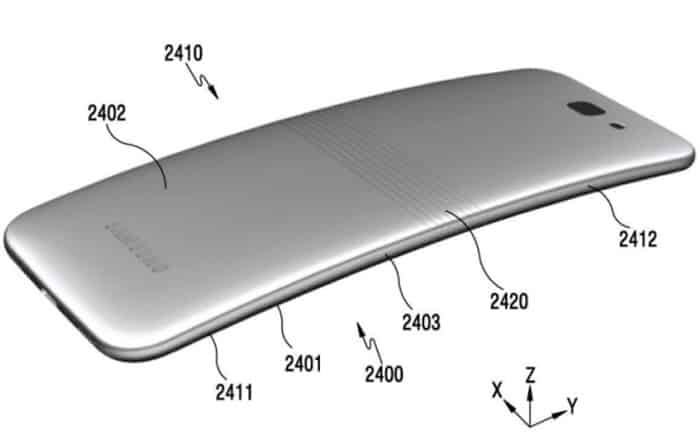 Bloomberg had previously reported that Samsung was planning to out two bendable devices by 2017. One would fold like a compact, while the other may measure 5-inch as a handset and 8-inch when opened up as a tablet. However, the firm’s Galaxy Note 7 debacle and Galaxy S8 pressure may affect the chances of it coming out with a flexible phone next year.