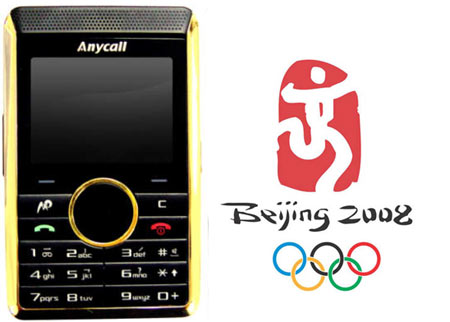 A while ago, we had reported about Samsung’s special Beijing 2008 Olympic Games campaign which included the unveiling of the P318 gold-plated mobile phone. Now, the company has released a few more details on the bling thing.

As Samsung happens to be the official Worldwide Partner in wireless communications equipment of the Beijing 2008 Olympic Games, the company said that the P318 handset will be made from special 18-carat gold.

According to Samsung spokeswoman Lee Soo-jeong, “This is going to be strictly sold and launched to the Chinese market. It’s basically a phone to commemorate and celebrate the Beijing Olympics.

The company has said that the P318 mobile phone will be a sleek-looking one which is mostly deep black in color, with the gold placed in the trim along the sides and covering the bottom half of the phone’s back.

The P318 handset is expected to include such features like a camera, Bluetooth and MP3 player.

The P318 mobile phone will surely draw the attention of all those who love anything with a dash of bling in it. However, according to the company, this phone will exclusively be available in China.

If you compare the Samsung P310 handset with this one, you could arrive at the conclusion that the P318 is just a classier looking version of the same.

Samsung has yet to decide the price and launch date for the P318 gold-plated mobile phone. This phone will surely appeal to the affluent Chinese folks.