Samsung does it again – Note 3 benchmark scores are allegedly optimized

Here we go again – Samsung is being accused of optimizing the Note 3 to look good in benchmark tests. Benchmarking a smartphone or tablet is a convenient way to measure performance and compare it with other devices, but it’s flawed. These scores can be easily tampered with and topping the charts doesn’t really tell how well the phone will operate in real life scenarios.

Nevertheless, many buyers still look at benchmarks before picking up a new gadget. Various manufacturers have taken advantage of this and have started optimizing their devices to perform at their peak in such tests, including Samsung. According to Ars Technica, the South Korean conglomerate has tweaked its latest phablet to deliver 20% more performance in specific apps. 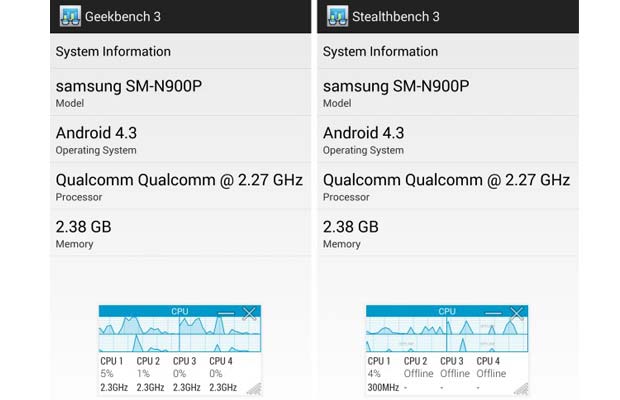 The company has done something similar with the international version of the Galaxy S4 where the device’s CPU and GPU would act differently when certain apps are running. According to the report, the Note 3 and LG’s G2 have similar specs, including the same Snapdragon 800 SOC clocked at 2.3GHz. However, the former still manages to smoke the latter in performance tests.

After a little snooping around, Ars Technica has come to a conclusion that the company has included a ‘special high-power CPU mode’ that gets to work in certain benchmark tests. They’ve also managed to disable the tweak. The above screenshots shows the Note 3’s CPU locked at 2.3GHz on the left when running Geekbench, while in Stealthbench (that’s identical to the former, but with a different name) only one core is active at 300MHz and the others are offline to conserve power. 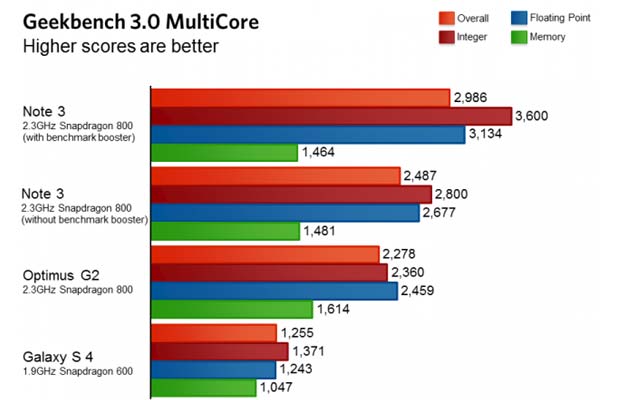 There’s a lot more than just this, so hit up the source if you want to go in-depth.

Facebook
Twitter
Pinterest
Linkedin
ReddIt
Tumblr
Flip
Previous articleFreedomPop offering free voice, text and data, you’ll still have to buy a phone
Next articleHTC brings the Desire 300 to China as the 301e, price rumored at around $200