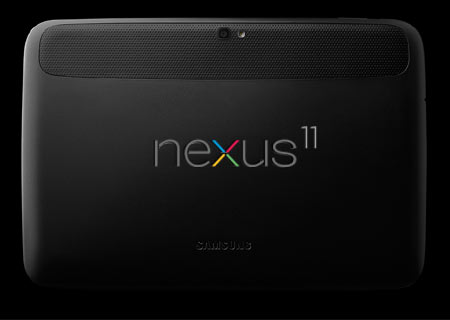 In addition to the recently announced Galaxy Tab 3, the Samsung Nexus 11, Tab Duos, Tab 8.0 AMOLED and Tab 11 Super PLS TFT are apparently in the works with a launch scheduled for this year. For those who haven’t noticed, there’s no mention of a successor to the Note 10.1. The reason being that the company might land up scrapping the idea altogether, possibly because of weak sales the slate has encountered.

According to SamMobile, the South Korean conglomerate is collaborating with Google to get a new ‘pure Android’ tablet into the market. Dubbed as Nexus 11, the device will apparently be the first of its kind to pack an octa core processor. However, the report does note that it’s still pending certification from the search giant. Where specifications are concerned, it will be powered by an Exynos 5410 SOC that houses quad A15 as well as A7 cores with PowerVR graphics.

The 11-inch display will be a Super PLS TFT panel. While no mention of the internal storage has been made, rumors indicate that it could have a microSD card slot with support of up 64GB. The front will house a 2MP snapper and the rear will sport an 8MP camera. Additionally, Asus is expected to bring forth a new iteration of its 7-inch Google-branded slate. The Duos 7.0 is much like the Tab 3 where hardware components are concerned. The main difference here is that the former is equipped with 2 SIM card slots.

Apart from this, it will arrive bearing a 7-inch 600 x 1024p PLS LCD screen, dual cameras (3MP rear and 2MP front) as well as a dual core processor. The Tab 8.0 carries similar hardware components that are found in the Note 8. However, the 8-inch display implemented here proffers a FHD 1080p AMOLED panel instead of an HD one. The slate will pack in a quad core A9 processor, a 5MP primary snapper as well as a 2MP webcam and a microSD card slot.

Coming to the last device on the list, the Tab 11 is the company’s own high-end slate that’s quite similar to the 11-inch Google-branded one. A dual core Exynos 5250 A15 CPU does the heavy lifting, while 8MP and 2MP front and back lenses, respectively, enable image as well as video capture. Apart from the aforementioned devices, the company’s 2013 portfolio will also comprise of the Note 3.

There’s no official or rumored release date or price for the Samsung Nexus 11 or any of the slates mentioned in this post. What we do know so far is that they are destined for launch this year itself.