The Nokia 9 has gotten leaked from a very unlikely source – Samsung. It seems the rival brand has some internal knowledge of the long-awaited smartphone. Either that or it’s seriously misinformed about HMD Global’s devices.

Frequent tipster Roland Quandt took to his Twitter account to post a screenshot from Samsung Latvia’s buyback program page. Head to the dropdown list of options and you’ll see four different Nokia 9 options listed. Two are single-SIM units with 64GB and 128GB of storage and the other two are dual-SIM units with the same amount of room. 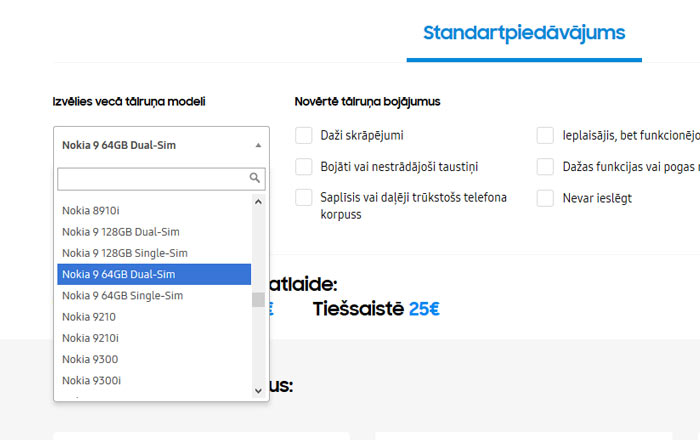 You can get up to EUR 292 (roughly Rs 24660) from your next Samsung phone in Latvia if you exchange the dual-SIM Nokia 9 with 128GB of ROM. Of course, this is impossible at the moment since the device hasn’t even gotten launched yet.

It’s unclear if Samsung knows something we don’t or if this is just a simple mix-up. The Nokia 9 in this list could actually be another Nokia phone like the Nokia 8 Sirocco. It’s pretty easy to get confused between all the numbers the brand has floating around.

GSMArena thinks Samsung probably works with a phone recycling facility which provides it with a list of eligible smartphones. The Nokia 9 might have accidentally gotten added to the list somehow. Moving on to more credible leaks, noted tipster Benjamin Geskin recently shared a render of the handset.

He says the image is based on leaks, so it can’t be taken as the real deal. Still, it provides a clear look at what the Nokia 9 could eventually shape up to be. There are five lenses at the back, accompanied by an LED flash unit and some other mysterious components.

There’s also a notch up front and a thin bezel at the bottom. Some say the Nokia 9 won’t have a cutout. We’ll find out the truth of the matter as and when more rumors pour in.