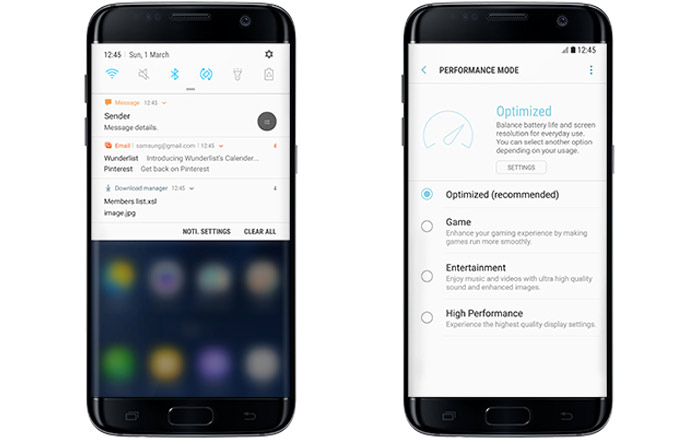 Samsung has officially begun rolling out Android 7.0 Nougat for the Galaxy S7 and Galaxy S7 Edge for general consumers. The update had actually begun seeding about a week ago for beta testers.

Samsung confirmed Nougat’s release in a blog post, asserting that the promotion will bring about a number of useful changes. Quick Panel now sports a cleaner look thanks to the elimination of titles from the icons. The symbols have been arranged into groups of nine to make them easier to find.

Owners of the Galaxy S7 and Galaxy S7 Edge can also take advantage of the integrated S Finder to locate things on their phone or online directly from Quick Panel. Notifications have gotten revamped so that they are showcased more clearly and support Nougat’s Direct Reply feature.

Samsung is looking to provide enhanced multitasking tools through the update. An improved controller lets the size be adjusted more simply in split screen view, while a pop-up window ability supports a maximum of 5 separate apps. Both combined will allow consumers to simultaneously conduct 7 tasks at the same time.

The Galaxy S7 and Galaxy S7 Edge are set to become the recipients of an all-new Performance Mode which lets people tune their device to meet specific goals. These include Optimized mode to increase battery life and speed and Game mode to give access to functions like Game Launcher and Game Tools.

There’s also Entertainment mode to improve sound and picture quality and High Performance mode to activate the highest quality display settings. Finally, Samsung Pass has made its way to the Samsung offerings. The feature lets users utilize their fingerprint to log into select sites and apps. Support for mobile banking app integration is currently in the pipeline.