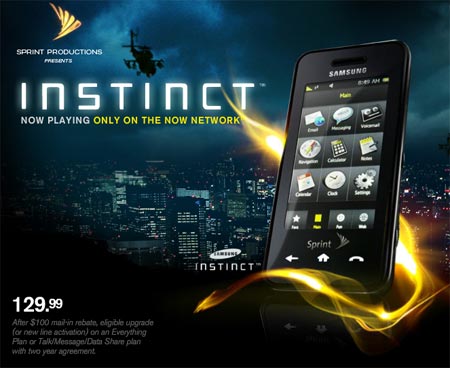 We had already reported about the Sprint launching Samsung Instinct mobile phone on June 20th. Now Sprint has revealed the updates regarding pricing details. The Instinct Smartphone will be available throughout US at $129.99 with a 2-year contract after $100 mail-in rebate.

Reportedly, the arrival of the iPhone 3G made Samsung and Sprint to reduce the price of the Instinct from $199 to $129.99. The iPhone 3G will be available in the US market from July 11 for $199.

The Samsung Instinct phone will feature EVDO Rev A network that is capable of delivering an access to live TV streaming. The Instinct looks more or less like iPhone. However it is not fully touchscreen like Apple’s model. The Instinct has two buttons for dialing and disconnecting call.

Some of the other features of the Samsung Instinct are a 2-megapixel camera for both stills and videos, support to 2GB microSD card, GPS-enabled video and audio driving directions etc.

Now it’s up to consumers to decide what they want to have a 2GB Samsung Instinct at $129.99 or Apple iPhone 3G for $199, which releasing in July.