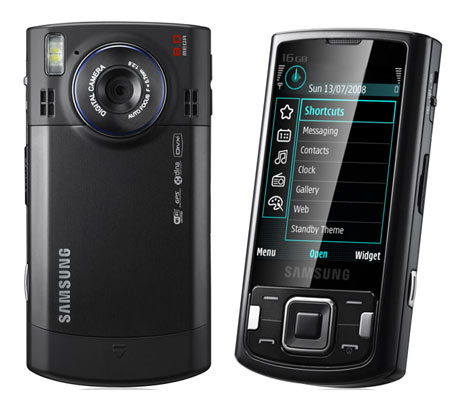 Samsung has announced a new mobile phone named innov8, which is scheduled to be available worldwide from August 2008. The phone is also known as Samsung i8510.

The most important feature of the innov8 phone is its 8 Megapixel camera. The phones sporting up to 5 Megapixel cameras are common these days, however a phone with 8-MP camera is still quite rare. The phone would surely be appreciated by photography enthusiasts as the camera also boasts features like smile shot, blink shot and face recognition.

In 2006 Samsung had also launched a phone integrating 10-MP camera in Korea.

Apart from camera the Samsung innov8 comes with a 2.8 inch 16M color LCD display. It also features media player that supports DivX, WMV, Real Player and MPEG4 formats. The phone’s external dual speakers and 3D surround sound are supported by DNSe 2.0 which helps users to be entertained while on the go.

Besides, the Samsung innov8 phone is equipped with latest connectivity options including Bluetooth, Wi-Fi and HSDPA high speed Internet. It also has GPS technology which offers navigation and geo-tagging service.

That’s not it. The phone comes loaded with two famous mobile games Asphalt and FIFA 08.

The information regarding pricing and availability has not been disclosed as of now.