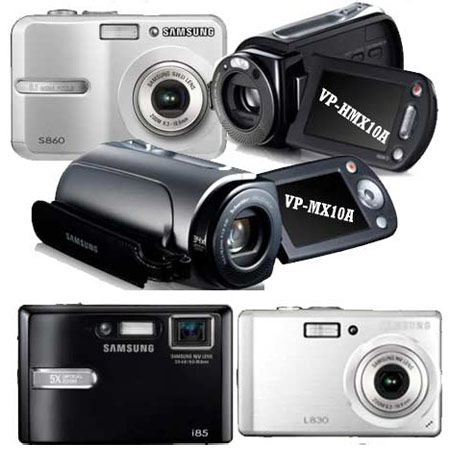 Samsung India has announced the launch of a slew of advanced 2008 series of Digital Still cameras and camcorders which includes the NV series, I series, L series and S series of digital still cameras.

According to Mr. R Zutshi, Dy MD, Samsung India, “In keeping with the changing consumer preferences , the new 2008 series of Samsung Digital Still Cameras comprises of Digital cameras with resolutions of 7,8 and 10 mega pixels , larger sized LCDs and sleek form factor .We have introduced color options across our different models as well”.

First up is the sleek 8.1 mega pixel i85 camera which has a 5x optical zoom lens. It sports a 3-inch TFT LCD screen as well as a personal multimedia player with MP3 functionalities! Other features of this camera include Face detection, capability to record movie clips in MPEG 4 format, movie editing and flash animated user interface. The Samsung i85 camera is priced at Rs.14,990.

Next up are the Samsung L830 and L730 Digital Still Camera which are aimed at those users who wish to have advanced features. The L830 is an 8 mega pixel camera, while the L730 is a 7.2 mega pixel one. Both of them housed in a compact aluminum body have a 3x optical zoom and 2.5-inch LCD screens. Other features include an Advance Shake Reduction feature and MPEG 4 movie recording capability. The Samsung L830 is priced at Rs.10,990, while the L730 costs Rs.8,990.

Two entry-level digital cameras have also been introduced by Samsung in India. They are the 7.2 mega pixel S760 and the 8.1 mega pixel S860 of the user-friendly S-series. Both of these digital cameras have a 3x optical zoom and are equipped with a Mode Dial that allows for smooth switching between various shooting options ranging from Automatic Mode to Video Recording.

The S680 and S760 digital camera use advanced Face detection technology and even enable clear sho9ts without flash in indoor settings as they support up to ISO 1000 and even use Samsung’s exclusive Digital Image Stabilization technology for correction of hand-shale. Further, they have an extra E button and short cut keys on the rear side which provides easy access to functions like color adjustment and red eye correction.

The newly launched range of Samsung digital camcorders include the highly compact VP-HMX10A, VPMX10A and VP-DX10. These camcorders use Samsung’s advanced Flash Memory technology and offer a longer battery life and QuickStart in 3 seconds. They have a touch screen and the unique Swivel Grip is able to rotate 135 degrees, providing an easy way for users to shoot video at very low or high angles.

The VP-HMX10A happens to be Samsung’s first HD camcorder. This compact camcorder sports a 2.7-inch high-resolution touch panel LCD screen. Further, Samsung’s 50 fps Progressive technology enables this camcorder to capture highly detailed videos. It also has 4GB of internal flash memory (1 hour of recording) and is able to work in H.264 at 720p and compatibility with SD/SDHC/MMC+ cards. This camcorder is priced at RS.34,900.