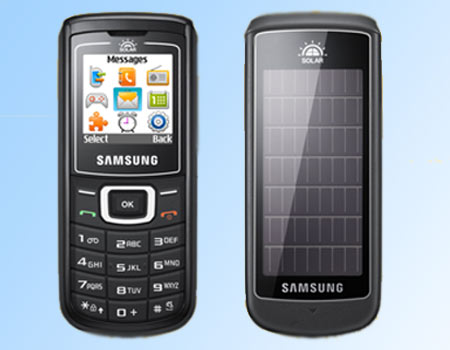 The extended solar powered battery of this phone puts aside the issues caused due to unavailable or unstable power supply, especially in the rural areas.

“The Solar Guru has been developed keeping in mind the needs of Indian consumers, especially customers residing in areas where the electric supply is unstable, so that the consumers can rely on solar charging to remain connected.” states J S Shin, President & CEO, Samsung South West Asia Headquarters. The Solar Guru represents the Company’s efforts to strengthen its leadership in the solar panel mobile market.

About an hour of solar charging offers around 5 to 10 minutes of talk time. This phone helps save money along with lower energy consumption.

“With Samsung’s cutting edge technology and consumer-oriented strategy, I believe the Solar Guru is the perfect fit for the Indian consumer – not only because it is solar powered, but because it has a host of customized features , especially developed keeping in mind the needs of Indian consumers” states Sunil Dutt, Country Head, Samsung Mobile Division.

Sporting a compact design, the Samsung Solar Guru features FM radio, MP3 ring tones, embedded games, Mobile Prayer and torch light. It also comes with security features such as Mobile Tracker that automatically alerts whenever the SIM card is changed as well as sends an SOS message during emergency.

The Samsung Solar Guru (Samsung Guru 1107) is available in India at a modest Rs. 2799. It is also said to launch in various markets including Europe, Southeast Asia, Southwest Asia, and Latin America.