This is not the first time when the Samsung I8800 Redwood phone has leaked on the web. The Tizen OS-based device has been showing up for quite a while now, but this time around we have some of its internal specifications and BrowserMark 2 score, thanks to the leaked benchmark results.

The minimum and maximum BrowserMark 2 scores for the device are 2447.68 and 2932.10, respectively and thus the average comes up to 2828.29. As GSMArena points out, it manages to clock in this number even though it is powered by the Exynos 4412 Cortex A9 processor. On the other hand, the Galaxy Note 3 powered by the Snapdragon 800 quad core SoC scores 3,041 on the same test. 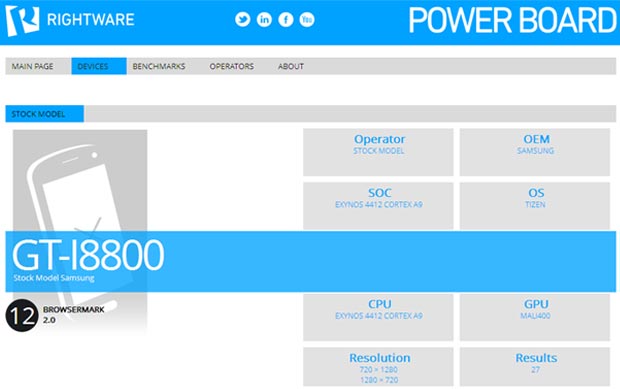 Not much has come to light except the processor on the specifications front. But what we do know is that it employs a Mali 400 GPU and renders HD visuals in 720 x 1280p resolution. Although the Tizen 3.0 version has also been announced, we doubt the device will run on it as the OS is not slated to be released commercially until Q3 2014. The Redwood smartphone is likely to make the most of Tizen 2.2.1.

Phones based on this platform will only be unveiled in February 2014, but the South Korean company has introduced a mirrorless camera that runs on the 1.0 OS and belongs to the NX range of snappers. A tablet for developers has been launched as well and it comes with some interesting specs too.

The Samsung I8800 Redwood hasn’t gone official and we are expecting the device to hit store shelves in February next year.