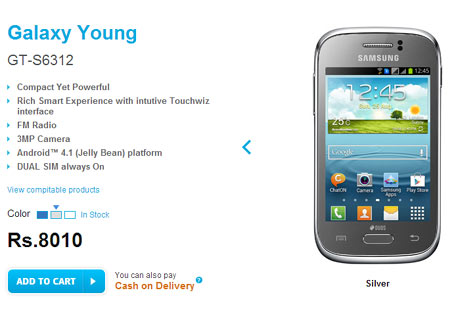 Samsung has officially launched its latest affordable smartphone, the Galaxy Young in India and has even put it up for grabs through the eStore for a Rs 8,010 price. The device is basically aimed towards young audiences who are on a lookout for a stylish Android device at a budget-minded amount.

The Samsung Galaxy Young was unveiled back in February along with the Fame smartphone. Both devices share similar features, with the most prominent one being Google’s 4.1 Jelly Bean mobile OS. Along with the TouchWiz interface, users will be presented with the Motion UI. Through this, widgets can be refreshed as well as updated by simply shaking the phone, and calls can be silenced by flipping it over. 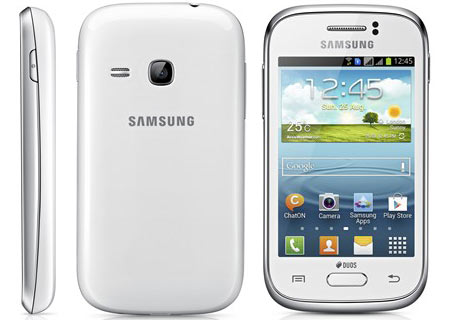 Additionally, the handset is preloaded with Game Hub Lite that delivers titles which are compatible and optimized for the device. Then there’s S Cloud for conveniently backing up and syncing data like contacts, bookmarks, and SMS, online. Another highlighted feature here is hybrid dual SIM support that enables 3G data access on one card and the ability to receive calls on the other.

The handset is designed with a compact form fact that has a curved frame which aims to deliver a comfortable grip. Fitted within it is an HVGA TFT touchscreen of 3.3 inches wide on the front and a 3MP camera on the rear. On the inside, a 1GHz processor is clubbed with 512MB of RAM to get things done, while 2GB of memory and a microSD slot cater to memory needs. Delivering the juice is a 1300mAh battery that can offer up to 400 minutes of talktime or 250 hours of standby. 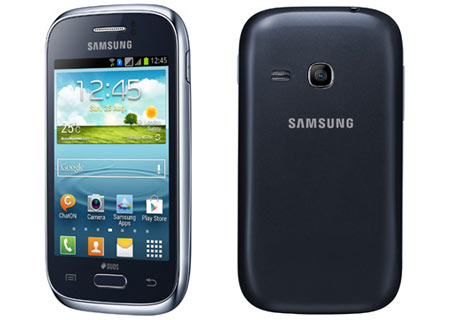 The Samsung Galaxy Young is also available through multiple retailers such as Infibeam, Flipkart and Saholic for a lesser price of Rs 7,850. The device is said to go on sale in white, deep blue, wine red and metallic silver, but so far only the last choice is in stock through the company’s own eStore.