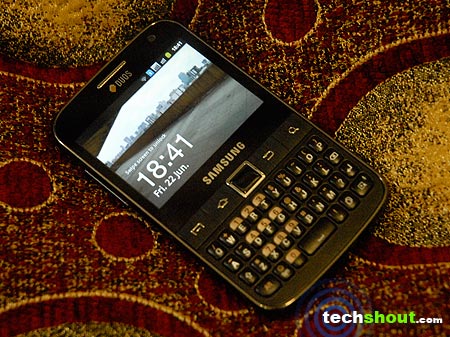 We’ve picked up the Samsung Galaxy Y Pro Duos, one of the latest ‘Young’ members of the Galaxy family, for a review. Unlike most modern smartphones, this little piece of hardware packs in a design that incorporates a touchscreen and a full-sized QWERTY keypad, giving users the best of both worlds. This design of sorts isn’t something new coming from Samsung. The first Android-based Galaxy member to take on this combo form factor was the Pro B7510 which launched back in 2011. The Y Pro and M Pro handsets were soon to follow with the trend. However, the device we’re reviewing today is a bit different from its predecessors. If you haven’t guessed by now, the handset is dual SIM enabled. Apart from these, there’s a lot we don’t know about the device as yet, and that’s mainly why we’re going to put in numerous hours of hands-on time. So read on if you thirst for more. 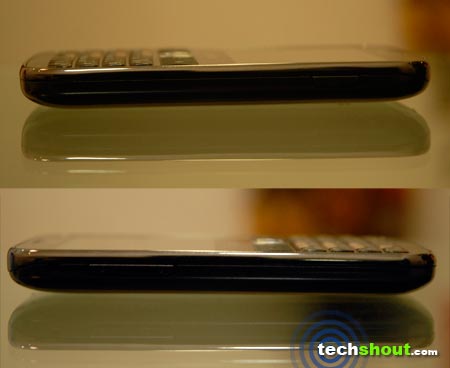 If you’ve used the used the Galaxy Y Pro, then you’d notice the least difference in this Duos variant. That’s mainly because the specifications of both handsets are more or less the same. A Broadcom BCM21553 SOC operating at a frequency of 832MHz is employed to do all the heavy lifting, while 384MB of RAM provides a helping hand. The embedded processor is based on the ARMv6 architecture and is deemed capable enough for accessing a wide catalog of applications on Google Play. The Android 2.3.6 OS runs the show here and it’s coated with a layer of the TouchWiz UI for a smooth as well as rich user experience. Being dual SIM-ready, the handset supports GSM networks such as EDGE and 3G for both SIM slots. Additionally, it offers HSDPA speeds of 7.2Mbps on the latter network. Other connectivity features include Bluetooth 3.0, USB 2.0 and Wi-Fi 802.11b/g/n standards. 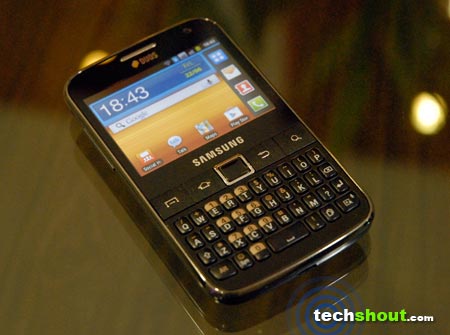 The front of the Samsung Galaxy Y Pro Duos dons a 262K 2.6-inch TFT LCD touchscreen proffering QVGA resolutions of 320 x 240 pixels, while the full-sized QWERTY keyboard presents itself as an alternative method of input not only for text, but also for navigating through menus. A 3.2MP snapper is affixed to the rear and enables digital zoom capabilities up to 4x. Moreover, a secondary VGA camera takes the usual place for live face-to-face calling. For hoarding needs, you’ll basically have 160MB built-in which is obviously not enough. However, a microSD card slot helps soothe those storage woes by supporting a total of 32GB. To power up all the aforementioned components, a 1,350mAh battery takes charge, delivering up to 1,170 minutes of talktime or 1,030 minutes of standby over 2G. If you’re more of a 3G user, then you can expect approximately 420 minutes of talktime or 750 hours of standby. 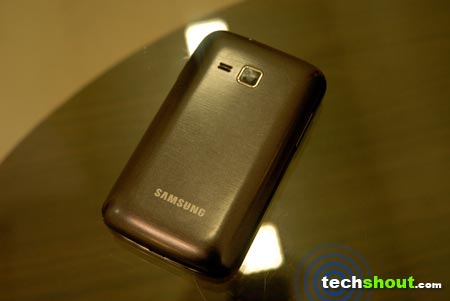 Various other devices such as the Nokia E6, BlackBerry Bold 9790 and Bold 9930 are designed around the same full-touch/QWERTY philosophy. However, their price tags go through the roof compared to our ‘Young’ smartphone. Weighing just about 112.3 grams, the unit which came over for a review is dressed in black featuring a brushed finish on its rear. A slim dark-silver bezel runs along the sides, passing by a 3.5mm audio jack on the top, volume controls on the left, a micro-USB port on the bottom and a power key on the right. 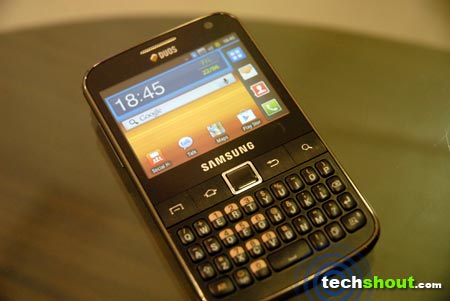 Fitted beneath the rear panel are the loudspeaker, primary camera and microSD card slot. Pop out the battery and you’ll find the dual SIM card slots. Apart from the QWERTY keypad, there the usual bunch of buttons you’d find on most Android phones. The home, menu, back and search keys are accompanied by a trackpad located in the center. If it wasn’t for the Samsung branding, you might just mistake this little piece of hardware for a BlackBerry member. The overall build feels sturdy and fits well in an averaged-sized palm. And most importantly or you could say surprisingly, the display isn’t a smudge magnet. In terms of dimensions, the Samsung Galaxy Y Pro Duos measures 110.8mm x 63.5mm x 11.9mm. 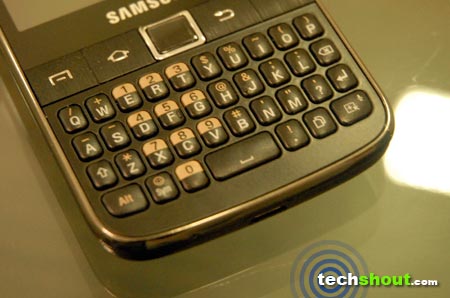 When it comes to Android, a lot of users take specifications more into consideration before picking up a device. The hardware isn’t all that important, although necessary, for delivering a smooth experience. We’ve learnt that from Microsoft’s Windows Phone platform. The interface is no doubt limited due to the small screen size, but it’s really responsive when it comes down to navigation. It’s disappointing to know that the panel doesn’t have multi-touch capabilities. Casual gaming isn’t a problem and titles like Angry Birds Space and Speedx 3D work just fine. The most annoying thing is that you have to push the power button to wake the smartphone up from sleep mode despite the plethora of keys available on the front. To top it off, Samsung hasn’t provided support for Adobe Flash. And since multi-touch input is left out as well, browsing the web isn’t much enjoyable. The battery life is quite decent. However, don’t get your hopes up if you plan on using the handset over 3G networks. With moderate data usage, the device doesn’t last for more than 4 hours.

A smooth and fluid interface makes navigating through menus convenient.

Switching between or setting the default SIM is quite convenient and takes not more than a press of the button.

The display, although of the low resolution type, is pretty clear. Reading text isn’t a problem as well.

The QWERTY keyboard is reliable for quick text input and the prediction is quite accurate.

What’s surprising is that the Samsung Galaxy Y Pro Duos is the first Gingerbread-powered smartphone we’ve come across that doesn’t support Flash.

Although there’s a plethora of keys on the front, you still have to hit the power button to wake the phone up from sleep. That’s rather annoying if you were to ask us.

The display lacks multi-touch capabilities, another feature that we consider a key element for the Android ecosystem.

We’ve told you how the Samsung Galaxy Y Pro Duos performs and what it packs in. What’s left? A 7.5 out of 10 is what we’re giving the phone after taking into consideration the smooth interface, the decent battery life and the swift text input through the keypad, amongst the various drawbacks we encountered. Potential buyers in India can pick up this Gingerbread treat for Rs. 9,790.