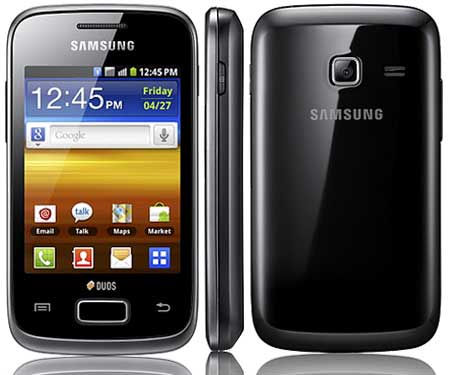 First up is the Samsung Galaxy Y Duos smartphone which dons a 3.14-inch QVGA TFT LCD display proffering resolutions of 240 x 320p within its 109.8mm x 60mm x 11.98mm form factor. Tipping the scales at 109g, it is powered by an 832MHz processor and backed by 3GB RAM. The onboard memory reads 4GB, while the smartphone also wraps in a 2GB microSD card. Running Android Gingerbread, the device is embedded with a primary fixed focus 3MP camera and offers connectivity via Wi-Fi, Bluetooth and USB 2.0. Besides the Samsung apps and the ChatON feature, users will have Google services at their disposal.

“With the tremendous success of the Dual SIM feature phones, we are now very pleased to be introducing the first Dual SIM smartphones powered by Android™. “We have been actively exploring this market and are well aware of the need for Dual SIM smartphones,” shares JK Shin, President of IT & Mobile Communications Division at Samsung Electronics. “With the Galaxy Y Duos and the Galaxy Y Pro Duos, Samsung will be offering more choices for all consumers.” 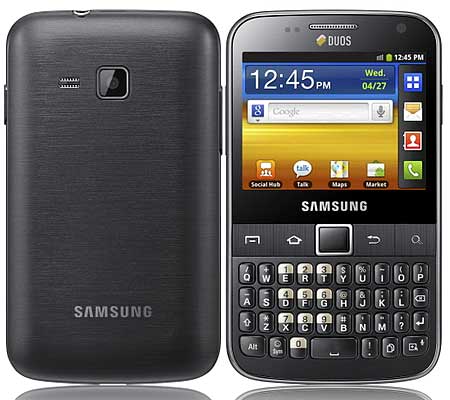 Next up in the series is the Samsung Galaxy Y Pro Duos which has quite similar features to its counterpart. The major difference is that the latter will arrive wearing a 2.6-inch LQVGA TFT LCD screen and a QWERTY keypad in tow. This mobile phone sports a 110.8mm x 63.5mm x 11.9mm profile and weighs around 112.3g. Plus, it possesses a front facing camera for video conferences and chats. The handset will be complete with Polaris for easy viewing of documents and would also offer Samsung’s Find My Mobile Service. Along with the Gingerbread OS, the connectivity options, primary camera, memory, storage capacity and other services, all remain the same as that of the Duos.

The Samsung Galaxy Y Duos and Pro Duos release date and price details have not been revealed as of now. The Galaxy Y Duos can be expected to arrive in Russia by January 2012 and will apparently be rolled out to Latin America, Europe, CIS, Middle East, Africa, China, Southeast and Southwest Asia later. The Galaxy Y Pro Duos will initially be seen hitting shelves in Europe, CIS, Southwest Asia, Latin America, Middle East and Africa.