When a device features a 7-inch screen, a tablet is what we prefer calling it but the new Samsung Galaxy W prefers being marketed as a phablet or a smartphone. We do not know why the company has taken such a step, but then again, people were also skeptical when it had first launched the Note which too was quite large for its time.

The Samsung Galaxy W has been sighted in Korea as an SK Telecom exclusive, so there are no indications of a western release anytime soon. It’s sporting the company’s smartphone user interface rather than the one meant for tablets. Another anomaly is the fact that its specs match those of the recently leaked SM-T2558 device. 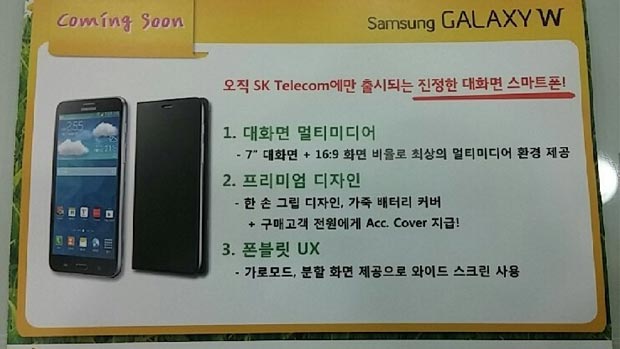 Now judging by Samsung‘s conventions in the past, the T in that name stands for tablet. Why would a phablet feature such a branding? May be the Galaxy W started off as a 7-inch tablet but ended up being a smartphone instead. So there are high chances of this device grabbing a different model number when it’s out.

To be clear, the handset benefits from a 720p HD panel and a 1.2GHz quad core processor. Moreover, 1.5GB worth of RAM, an 8MP rear camera, a 2MP front snapper, 8GB of storage and a microSD card slot also find their way into it.

As SamMobile is pointing out, it could be that the Samsung Galaxy W will make its way into other territories branded as the Mega 2 which has been in the rumor mills as well recently.