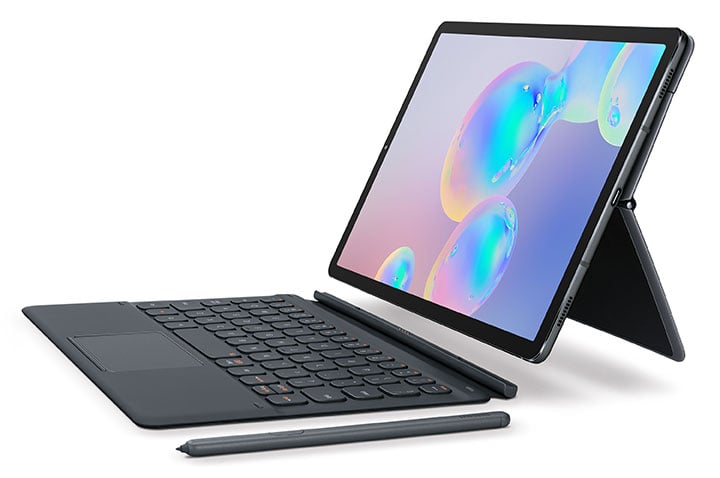 The general consensus surrounding tablets is that Apple’s iPad Pro is currently the best device that money can buy. Thanks to powerful hardware and a mobile operating system that is optimized for tablet use, the iPad Pro is regarded as the perfect laptop replacement for many consumers.

However, following the release of the Samsung Galaxy Tab S6, the iPad Pro now has some serious competition. After months of speculation and leaked information, the new tablet was unveiled at the Galaxy Unpacked event in New York on August 7th. But just how worried should Apple be about Android’s latest gadget? And, who will the Galaxy Tab S6 benefit?

Head to Head with the iPad Pro

In terms of competing characteristics, the Galaxy Tab S6 features a 10.5″ WQXGA Super AMOLED (1600X2560) screen. That spec produces a resolution of 287 ppi. Although the number of pixels on the S6 can’t match the iPad Pro, the resolution is better (264 ppi for the iPad Pro).

In terms of performance, the Tab S6 comes with two memory options: 6GB of RAM and 128GB of internal storage or 8GB RAM with 256GB of internal storage. On top of these options, the tablet features the Snapdragon™ 8150 processors, which allows users to choose one of the following set-ups: 1×2.8GHz, 3×2.4GHz or 4×1.7GHz. Whichever one a user opts for, the S6 can certainly compete with the iPad’s A12X Bionic processor in terms of speed.

Is Android Better Value for Money?

Beyond the initial outlay, the cost of owning an S6 could actually be less than an iPad Pro. For example, the advertised battery life for the S6 is 15 hours. Although tests have resulted in lower scores, Samsung’s product will still last longer between charges than the iPad Pro (approximately 10 hours). Based on that alone, the running cost of an S6 should be lower as it won’t consume as much electricity.

A more obvious saving comes in the form of insurance. With any leading tablet costing upwards of £600, covering it against theft and damage is crucial. Today, the top insurers not only provide generic cover but operator-specific policies. For example, customers can protect Samsung mobile devices from £34.99 per month. Alongside international cover for tech errors, loss and theft, these policies can be applied to non-new products.

By offering to insurance products six months after the purchase date, these companies are helping tentative consumers break away from in-house policies. Although Samsung offers its own form of protection (Care+) just as Apple does, it’s far less militant about it. Therefore, Tab S6 users may have more freedom to explore the insurance market and find a vendor that suits their needs. This, in turn, could and should make owning an S6 cheaper than an iPad Pro.

What Sets the Tab S6 Apart and Who is it Made For?

The Galaxy Tab S6 comes with a dual-lens camera on the back which gives it a leg up against the iPad or indeed any competing Android tablets. The tablet also features an in-display fingerprint sensor and for a bit of added individuality. Additionally, the S Pen stylus magnetically attaches to the back of the tablet.

As is the case with most high-end tablets, they cover a particular niche on the tech scene by allowing users to complete a multitude of tasks on the go. Owing to its high-quality display and fast processing speeds, the Tab S6 will certainly be popular amongst gamers. In a similar vein, those looking to stream media on their daily commute or simply work on the go will have no issues with the Tab S6, such are the capabilities of the device.

The Samsung vs Apple War Rages On

Whether you choose to buy the iPad Pro or Tab S6 will ultimately be down to personal preference. Only by analyzing which interface you feel most comfortable with and what you’re going to be using the tablet for can you determine which one is the “best”. Ultimately, with Samsung and Apple looking to outdo each other at every opportunity, the customer is the main beneficiary. Thanks to the launch of the S6 and the ongoing battle between two of the market leaders, we’re set to benefit from a wealth of innovations going forward. So, regardless of the device you opt for, sit back and enjoy the ride.