It looks like Samsung is bringing its Galaxy S series to the big screen category with the newly leaked Galaxy Tab S lineup that’s rumored to carry high-end specs and various features found on the current flagship phone. The upcoming range will comprise of two models and will be the first from the company to offer 2K AMOLED panels.

SamMobile has all the details about the Samsung Galaxy Tab S series. The lineup includes an 8.4-inch and a 10.5-inch model and we’re pretty sure the latter slate is the SM-T800 which was leaked a month back. The smaller version will go by the model number SM-T700. Both devices are to offer WQXGA (2560 x 1600p QHD) AMOLED displays and they will be powered by the Exynos 5420 Octa SOC which comprises of a quad core 1.9GHz Cortex A15 cluster, quad 1.3GHz Cortex A7 cores and a 6 core Mali T628 GPU. 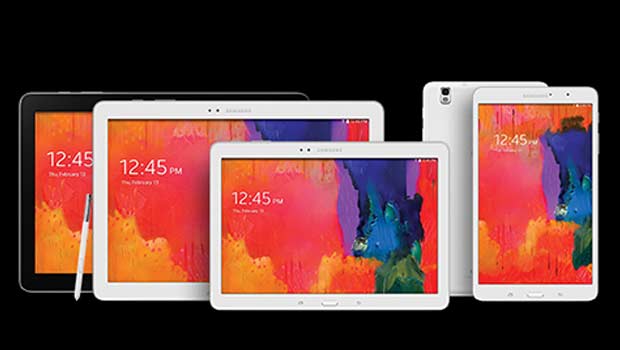 While we know that HSPA+ and 4G LTE models will also be available, there’s no information on whether the company will implement the Snapdragon 800 series chipset in the cellular variants. Rumor has it that Samsung is sourcing modems from Intel to integrate with its own chipset. Like the Galaxy S5 flagship, the Samsung Galaxy Tab S series will have fingerprint sensors incorporated into the home button. Apart from these features, the tablet will also sport dual cameras, 8MP rear and 2.1MP front, as well as 3GB of RAM.

The Samsung Galaxy Tab S series will be designed to look quite similar to the Galaxy Tab 4 slates and it will arrive in shimmer white and titanium grey shades. Also, the company is said to be working on new flip covers that attach to the device via proprietary connectors embedded on the rear.