Samsung Galaxy Tab S series officially available in the US

The wait for the Samsung Galaxy Tab S is finally over as the 8.4-inch and 10.5-inch models have officially gone on sale in the US starting today. Both devices are being offered through the company’s online store and Amazon. Also, these are Wi-Fi-only and there’s no word on when or which carriers will sell the Snapdragon 801-powered LTE variants in the US.

The Samsung Galaxy Tab S series isn’t the first to offer 2K visuals. The company’s Tab Pro lineup also has WQHD displays and beefy processors. What different is that the latter series comes with LCD panels, while the former devices are the first to offer 2K visuals through an AMOLED screen. The outcome is deeper and more saturated colors which deliver a visual treat. 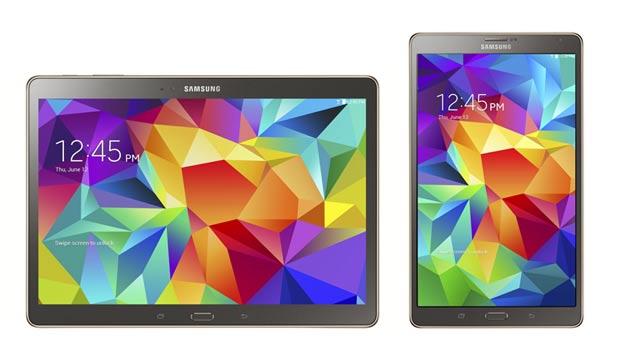 Another key feature of the new series is that the tablets are super slim. Both models measure just 6.6mm in thickness. And where hardware is concerned, they share similar components as well. An Exynos 5 Octa chipset powers them up with Android 4.4 KitKat running the show. Both devices have 3GB of RAM and come in storage options of 16GB and 32GB.

However, only the former choice is currently available. There’s 128GB expandable memory as well, via the microSD card slot. The 8.4-inch model features a 4900mAh battery, while the 10.5-inch version has a 7900mAh cell.