All that was being said about the Samsung Galaxy Tab S has turned out to be absolutely true, even as the tablet range has finally gone official with all its rumored specs intact. Set to be made available in 10.5-inch and in 8.4-inch models, this slate marks the company’s second foray into the Super AMOLED tablet arena.

And these aren’t just any usual displays; they feature a WQXGA resolution of 2560 x 1600 pixels. Samsung has done well to keep the sizes and weights of these devices on the lower side. The larger version of the Tab S tips the scales at 465 grams, while the smaller one weighs in at 294 grams. Both units are 6.6mm thin. 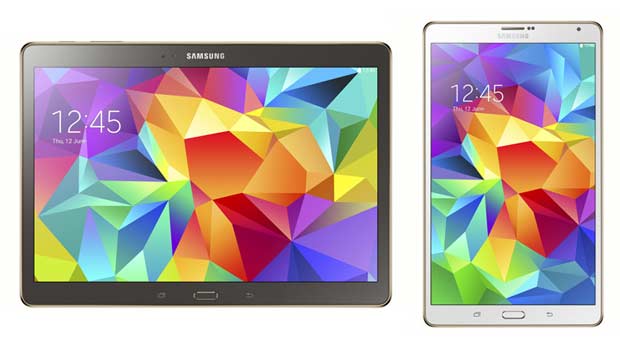 Each of the 10.5-inch and in 8.4-inch versions of this slab will be made available in Wi-Fi-only and Wi-Fi + LTE variants with 16GB or 32GB of stock storage (depending on markets) as well as support for microSD expansions of up to 128GB. Titanium Bronze and dazzling white are the two color options available.

While the Wi-Fi model of the Samsung Galaxy Tab S will be powered by the Exynos 5 Octa chipset bearing a quad core 1.3GHz Cortex-A7 and quad core 1.9GHz Cortex-A15 setup, the LTE variant will run on a Snapdragon 800 chipset featuring a 2.3GHz quad core Krait 400 CPU. Both versions will kick in 3GB of RAM.

Here’s a neat look at the specs of the Samsung Galaxy Tab S:

This tablet range takes its design cues from the Galaxy S5, borrowing its perforated back surface and overall looks. An IR blaster as well as a fingerprint sensor also find their way into these slates.