With two weeks left to go for the Samsung Galaxy Tab S series unveiling, the 8.4-inch model has decided to show up in a benchmark listing revealing its specifications. The device is the smallest member is the series, the largest being 10.5 inches, and the latest leak has provided more information on the hardware.

We already know a lot about the Galaxy Tab S series, but so far only the 10.5-inch model has been pictured in the wild. We’re sure we’ll get a good look at the 8.4-inch model before it goes official on June 12. The tablet is said to come with a 2560 x 1600p display which isn’t a first from Samsung, but it will have an AMOLED panel and not an LCD. 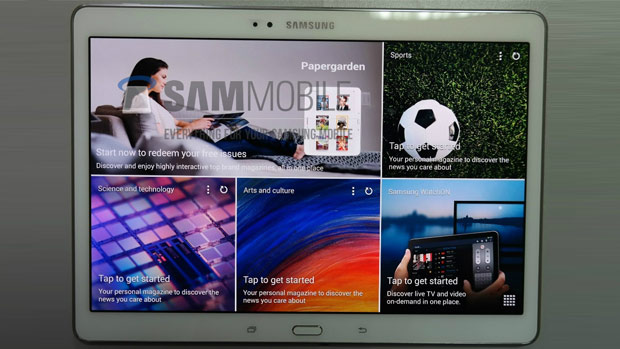 Additionally, the device isn’t likely to have 2GB of RAM, as previously rumored, but 3GB of system memory. The AnTuTu website also discloses that there will be 32GB of built-in storage and the Exynos 5 Octa 5420 chipset with Mali T628 graphics. In a previous leak, price details for both tablets were revealed by a Finnish retailer. The Wi-Fi model is said to sell for €449.90, while the 4G option is tagged at €563.90.

It won’t be long before the Samsung Galaxy Tab S series goes official as we’re just two weeks away from the unveiling which will take place in New York City. The conglomerate is also expected to showcase multiple devices from its flagship S5 series at the event.