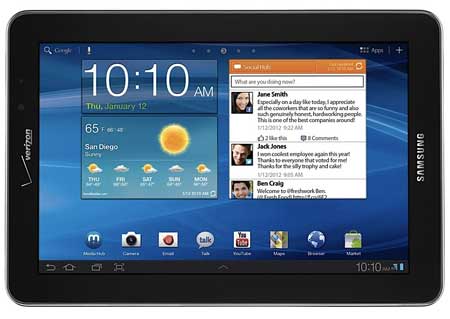 The Samsung Galaxy Tab 7.7 with its 4G LTE capabilities, is getting ready for a release through Verizon Wireless in the U.S. We had earlier reported that the carrier will also be seen welcoming the Droid Razr Maxx by Motorola in the coming weeks and providing prospective users with a couple of options to sift through, before they zero in on any gadget.

The slab wraps in a 7.7-inch Super AMOLED Plus touchscreen display delivering resolutions of 1280 x 800 pixels. Besides possessing an HD display, the tablet boasts of a sleek chassis measuring a mere 7.9mm and tipping the scales at 340g. This offering couples design with style and hides a 1.4GHz dual core processor underneath its hood to power up the slab. Along with running the Honeycomb OS and TouchWiz, the Samsung Galaxy Tab 7.7 employs an HTML5 browser for enhanced speed and performance.

The rear panel sports a 3MP camera with LED flash and full 720p recording capabilities, while the front-facing snapper is a 2MP one. Although the device includes 16GB of onboard memory, its external storage can be expanded up to 32GB with help of a microSD card. Features such as QuickOffice Pro HD, Wi-Fi Direct, AllShare and Peel Smart Remote as well as access to Samsung Apps, Media Hub, Social Hub and Google services along with the Android Market are provided by the device. 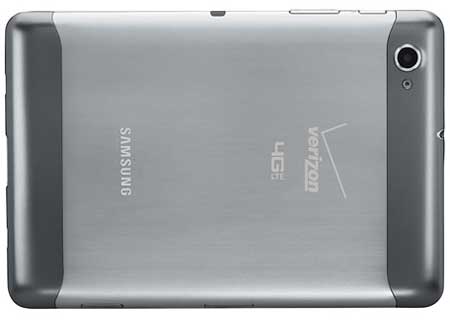 Apart from being Wi-Fi enabled, this Samsung tablet can serve as a hotspot for 10 Wi-Fi enabled devices on the 4G LTE network and even share 3G connectivity with up to 5 gadgets. The company is also stringing along other optional accessories for the Tab 7.7 which include a keyboard dock, a book cover case, an HDTV adapter and a multimedia dock amongst others.

The Samsung Galaxy Tab 7.7 price and availability details are unclear as of now, but potential users can stay tuned to get updates on the same which should be made available sooner than later.