Barnes & Noble is struggling to stay afloat in an eReader market dominated by Amazon Kindle products, and the Samsung Galaxy Tab 4 Nook tablet is just one of its attempts at trying to change that. This slate is nothing but a 7-inch version of the original device with a touch of the retail giant’s software.

With its price fixed at $180, the Galaxy Tab 4 Nook tablet is said to have been equipped with $200 worth of free content in the form of bestselling books, magazines and TV shows. It will offer the standard Nook reading experience, but what’s interesting is that it will retain support for Google Play Services which means, the Play store and all its apps will be available for download, unlike on Amazon’s eReaders. 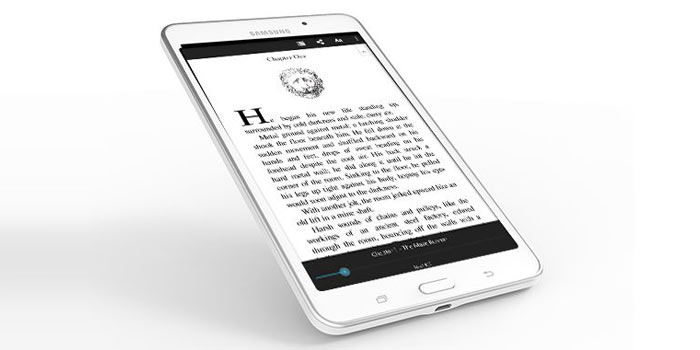 The Samsung Galaxy Tab 4 Nook features a 7-inch display with a resolution of 800 x 1280 pixels. The Galaxy Tab 4 Nook tablet runs on a quad core 1.2GHz processor that’s assisted in its operations by 1.5GB of RAM. A 3MP rear camera and a 1.3MP front one are also included in its offerings.

Here’s a clear look at the specs of the Samsung Galaxy Tab 4 Nook tablet:

For now, the Samsung Galaxy Tab 4 Nook has only been unveiled for the US and there’s no word on any plans about a possible release outside the country. Like we said, its price has been outlined by the retailer to be $180, after a quick $20 rebate.