Samsung Galaxy Tab 3 Kids will really get them young, iPad Junior coming up?

A Samsung Galaxy Tab 3 Kids has popped up in the news; talk about brand building by making sure you get them young. You may say that another biggie, LG, already has the Kids Pad out in the market. But its specs are nothing much to talk about compared to that of Samsung’s SM-T2105. And what about Cupertino? Maybe the segment for electronics for children is not something Apple has considered yet. But with its biggest rival stepping into the field, will the company perhaps give more thought to it? We’ll tell you why it should.

But before that, let’s take a look at the Samsung tablet’s specs and other child-friendly options available in the market. The Tab 3 has a 7-inch screen, 1.3MP front camera, 3MP main lens and 1.2GHz dual core processor. It runs on Android Jelly Bean 4.1, a 4000mAh battery and 1GB RAM, apart from sporting 8GB onboard memory that is complemented by a microSD card slot for adding 32GB of extra space. 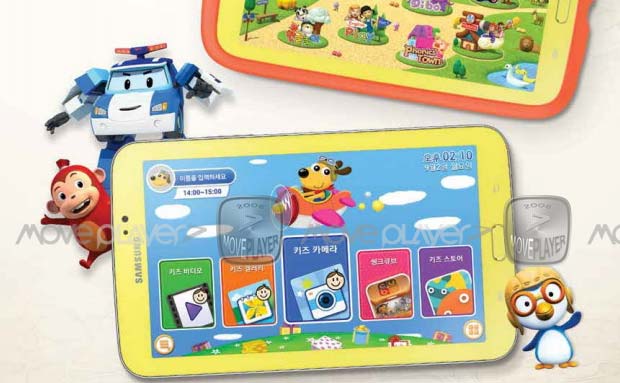 Even if it is a response to LG’s Kids Pad, as Tablet News puts it, the latter’s features are so-so and the design’s less pleasing to the eye. We know we’d be thanking our parents for cultivating good taste in us early on if the child-friendly Tab 3 had been our playmate instead of the colorful plastic options in kids electronics on offer. Think your tiny tots are more likely to go for brightly painted devices?

Here are some alternatives –

Why Apple may want to look in this direction

First off, getting ‘em young is never a bad idea, unless you’re talking about involving alcohol, drugs, Miley Cyrus and similarly harmful substances. A recent uSwitch survey revealed that 1 in 10 British kids apparently owns a phone by the time he/she has reach 5 years of age. Parental concerns about their young one’s safety could outweigh the risks of handing a connected device like this to impressionable minds.

When people can equip their children with a phone with the idea of safeguarding them, why would they not take it a step further and add a tablet for educational purposes to the mix? Textbooks and other classroom-related materials are going digital too. Maybe Apple thinks it has its back covered with the student discounts it offers?

As for the Samsung tablet, there’s no word on the price and all the markets in which it will be sold eventually.