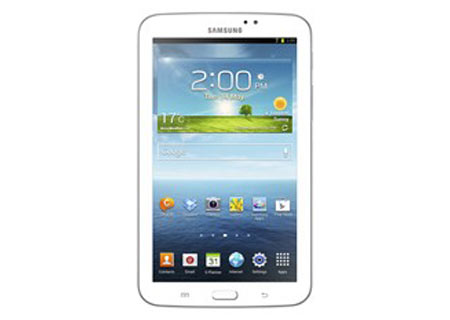 The Samsung Galaxy Tab 3 8.0 has managed to make it into the rumor mill once again and this time, the details have surfaced through a benchmark suite which make them somewhat concrete. The device was speculated to go official along with its 7-inch sibling that was announced last month and a 10-inch version has also been anticipated.

Dutch website TechTastic managed to spot the device on GLBenchmark. SamMobile points out that the smaller version carries the SM-T211 model number. So based on the conglomerate’s naming fashion, the SM-T311 SKU on the slate in question would mean the Tab 3 8.0. The report notes that it would arrive powered by a dual core processor like its smaller sibling. However, the SOC employed here will be an Exynos 4412 with a clock speed of 1.5GHz instead of 1.2GHz.

Accompanying the Cortex A9 based CPU will be the ARM Mali 400 GPU. And there’s indication of 2GB of RAM onboard as well, which should sweeten the deal altogether. Another improvement over the 7-inch option is that the screen panel which measures 8-inches wide will proffer WXVGA resolution of 1280 x 800 pixels. Apart from this, the device will be loaded with Android 4.2.2 Jelly Bean out of the box. It’s safe to assume that the conglomerate won’t miss a chance to throw in its TouchWiz interface.

Where the design is concerned, the slate should be quite similar to the most recent iteration in the series. The leak has managed to provide insights on a few physical aspects such as dimensions and weight. The device will measure 209.6mm x 112.1mm x 6.95mm and it tips the scales at 330 grams. Apart from all these, previous reports suggest that a 1.3MP webcam will be placed on the front, while a 3MP camera is situated on the rear.

An official confirmation for the Samsung Galaxy Tab 3 8.0 is expected to surface in the coming days, so stay tuned for an update. What’s more, the company seems to have a host of slates in the works for launch this year.

A summary of the rumored specifications can be found below.