Samsung Galaxy Tab 3 210 is the cheapest one from the range, and it’s out in India now

Late in July, Samsung launched three of its new Galaxy Tab 3 slates in India, and within about a week’s time, didn’t hesitate to bring their prices down to considerably. And now, as September’s upon us, the company has finally decided to release the fourth tablet from range by putting it on sale through Snapdeal. Dubbed the Samsung Galaxy Tab 3 210, this device is actually a Wi-Fi-only 7-inch slab which has its price set at Rs 12,399.

It comes equipped with a 7-inch TFT capacitive touchscreen display which is able to dole its visuals out with a resolution of 1024 x 600 pixels. Running it from within is a 1.2GHz dual core processor which is given company by 1GB worth of RAM. The tablet grabs 8GB of internal storage memory which is expandable up to 32GB using its microSD card slot. The Android 4.1 Jelly Bean device also features a 3MP rear camera and a 1.3MP front snapper, and it’s powered by a 4,000mAh battery. 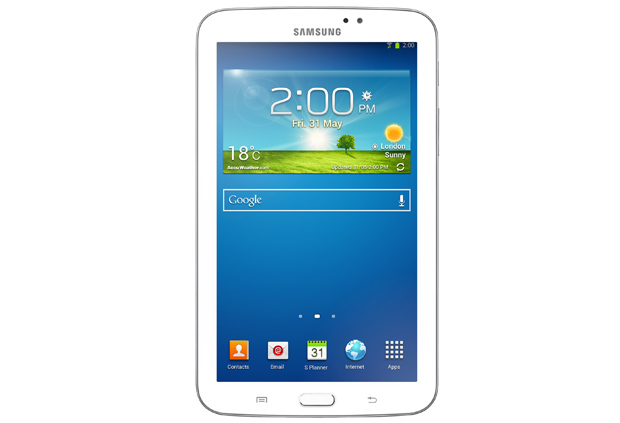 The new Samsung Galaxy Tab 3 range is also home to three other models. One of them is a 3G connectivity-equipped cousin of the above motioned slab which grabs the 211 name. And then there are two 8-inch devices which too kick in 3G and Wi-Fi versions. Called 311 and 310, these tablets both show off an 8-inch WXGA panel, a 1.5GHz dual core processor, 1.5GB of RAM, 5MP rear camera and a 1.9MP webcam. Oh yes, and there’s a Kids version of the tablet which has hit the rumor mills as well.

Like we said, the Samsung Galaxy Tab 3 210 is now available for purchase via Snapdeal at a price of Rs 12,399.