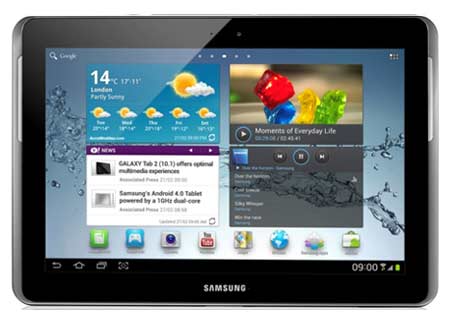 The Samsung Galaxy Tab 2 10.1, a larger sibling of the recently introduced 7-inch slab, forms a part of the 2012 lineup of tablets from the Korean manufacturer. Starting next month, the series will initially debut in the UK before it goes globetrotting.

Claimed to be apt for home and family use, the portable tablet will be released in 3G as well as Wi-Fi versions in both 7- and 10.1-inch configurations. It offers a multi-touch real estate of 10.1 inches and the WXGA PLS TFT renders visuals in 1280 x 800p resolutions. Fueled by a 1GHz processor, it binges on the Ice Cream Sandwich platform. The slate is also armed with dual cameras, a 3MP rear facing snapper and a VGA front facing webcam for video conferencing.

The primary camera can record high definition videos at the rate of 30 frames per second. The slab extends support to a number of video and audio formats inclusive of MPEG4, H.264, VP8, WMV7, AVI, MP4, FLV, MKV, MP3, AAC, MID, WMA, WAV and OGG. Moreover, the 3.5mm headphone jack ensures connections to headsets and a number of other audio accessories. 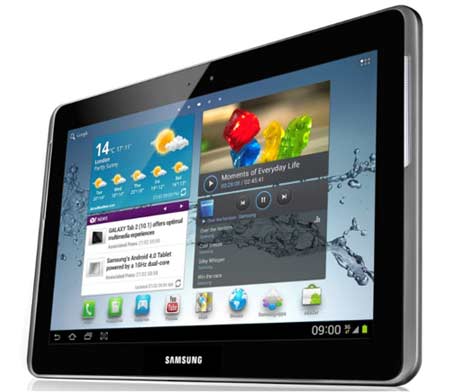 Available with onboard memory of 16GB or 32GB, the device is embedded with an expansion slot for up to 32GB microSD cards. It further draws its power from a 7,000mAh lithium-ion battery. Besides Wi-Fi and 3G, other connectivity options include Bluetooth v3.0 and USB 2.0 port.

The Samsung Galaxy Tab 2 10.1 release date and price is yet to be revealed. It is slated to be made available in March this year.