The Galaxy S9 and Galaxy S9+ were recently leaked in the form of CAD renders and 360-degree videos, and now there are a couple of live images to shed more light on the duo. Only the front and back plates have made its way online, but it’s enough to get an idea of what the complete phone will look like.

Starting with the pair above, the one on the left is supposed to be the Galaxy S9+, while the one on the right is apparently the Galaxy S9. Other than screen size, both are identical. Moreover, the pair look just like its previous variant. The bezels at the bottom are slightly narrower, but the overall design is pretty much the same.

This might come as a disappointment to people who were hoping for something a bit more radical. There is a big change at the back expected, with the fingerprint scanner set to travel below the camera lens instead of beside it. This checks out in the alleged image of the Galaxy S9’s backplate below. 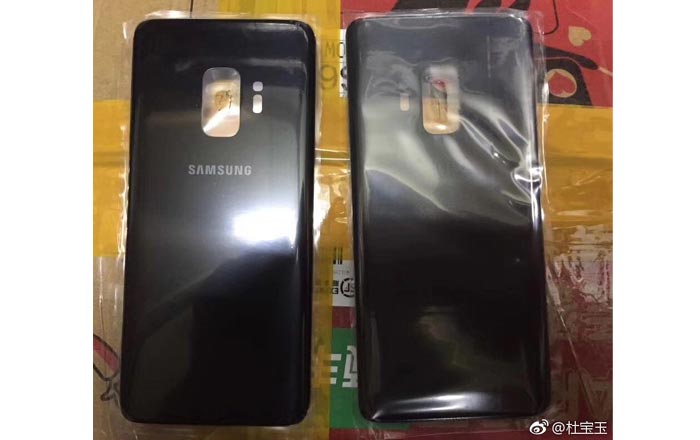 A separate rumor alleges that the Galaxy S9 is getting its hands on a 3200mAh battery. This is 200mAh more than its predecessor, a welcome increase. It could even be blessed with Qualcomm’s Quick Charge 3.0 technology and a 12W charger. There’s no word on the Galaxy S9+’ capacity, but it’ll also likely get an upgrade.

Samsung’s probably going to place a single camera on the Galaxy S9 and dual cameras on the Galaxy S9+. The company might just stuff the former with 4GB of RAM and the latter with 6GB of RAM to further distinguish the two. This formula’s worked out for Apple, so it might just be a success for the South Korean firm as well.